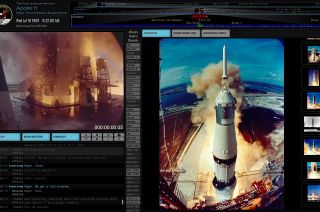 With a single click, a new website can take you back 50 years and place you directly into the real-time action of the first moon landing mission.

But if "Apollo 11 in Real Time" creator Ben Feist has gotten it right, you will want to click many more times than just once.

"You can just let the mission unfold in front of you. However, if you choose to dig in, it's the most deep and wide rabbit hole of information I could muster," said Feist in an interview with collectSPACE.com. "I've tried to make it rewarding to explore."

Feist's website at ApolloInRealTime.org replays NASA's Apollo 11 mission as it happened, second by second. The website's coverage begins 20 hours before the launch, which took place on July 16, 1969, and continues until just after Neil Armstrong, Buzz Aldrin and Michael Collins stepped aboard the USS Hornet recovery ship on July 24. It does so using all of, and only the media from the mission — photos, film footage, television broadcasts and more — all synchronized to Ground Elapsed Time, the mission's master clock.

"If you want to see a certain photo, for example, the whole experience jumps to the moment the photo is being taken. If you'd like to research one of the lunar samples, you can find it at the moment the sample container is being filled," Feist described.

The site, though, goes far beyond organizing the known media. Apollo 11 in Real Time presents tens of thousands of hours of audio, and, where it exists, the corresponding footage that has rarely been seen and has never been easily accessible until now.

"With the help of archivist Stephen Slater, the website is the most complete presentation of the mission's historical film footage ever assembled," said Feist. "It contains all of the 16mm film that was scanned for the recent documentary, 'Apollo 11.' Much of this film has had sound added to it for the first time — painstakingly lip synced with the restored mission control audio that was just digitized.

"It's pretty much guaranteed that visitors will see things that they've never seen before," he said.

They will also hear things they have never heard. The centerpiece of the website is the 11,000 hours of Mission Control audio that has been synced to the mission clock for the first time.

"For any moment in the mission, visitors can open a panel that exposes 50 channels of audio covering every control position in Mission Control and several other communication loops," described Feist. "For example, if you'd like to hear what the Guidance officer (in charge of the guidance computer operations) was saying during the moon landing as the crew encountered the infamous program alarms, just tune in. Then you could jump back to the beginning of the landing again but this time listen to the CapCom [the capsule communicator], or FIDO [the flight dynamics officer], etc.

"I've done my best to make this website a tool that will enable people to research how mission operations were conducted 'behind the scenes,'" he said.

Feist previously produced a similar website for the Apollo 17 mission, the last mission to land humans on the moon, and it was because of that site that he was recruited to restore the audio for director Todd Douglas Miller's documentary "Apollo 11," released by NEON and CNN Films.

Both projects, and the multi-year process of building Apollo 11 in Real Time, has provided Feist with a fresh appreciation for the format.

"Running through the entire mission is very rewarding. You really get to know the personalities of the crew and controllers. It feels very current — as though it's happening right now," he said.

"During the anniversary, clicking the 'Now' launch button will drop you into the mission exactly 50 years later, to the second," said Feist. "If I had my way, all of humanity would take a moment out of their busy lives, tune in and marvel at the scale of what humanity can achieve when we all work together."