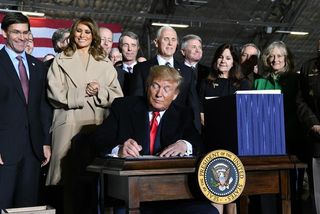 President Trump has signed the 2020 National Defense Authorization Act and with it directed the establishment of the U.S. Space Force (USSF) as the sixth branch of the armed forces.

"It was nearly half a century from Kitty Hawk to the creation of the Air Force. And now it's 50 years after Apollo 11 that we create the Space Force," Trump said during signing ceremonies at Joint Base Andrews in Maryland on Friday (Dec. 20), which you can watch here.

"It's a big moment. That's a big moment, and we're all here for it," he added. "Space … going to be a lot of things happening in space. Because space is the world's newest warfighting domain. Amid grave threats to our national security, American superiority in space is absolutely vital. And we're leading, but we're not leading by enough. But very shortly, we'll be leading by a lot. The Space Force will help us deter aggression and control the ultimate high ground."

Trump also said he will appoint Gen. Jay Raymond to be the first Chief of Space Operations, the senior military member of the new branch.

"And he will become the very first member of the Space Force," the president said. "He will be on the Joint Chiefs, which we're now expanding by one position. That's a very powerful position. So, General Raymond, congratulations, and thank you for you everything you've done."

"We are at the dawn of a new era for our nation's armed forces," Secretary of Defense Mark Esper said in a statement. "The establishment of the U.S. Space Force is an historic event and a strategic imperative for our nation. Space has become so important to our way of life, our economy and our national security that we must be prepared as a nation to protect it from hostile actions."

Esper also stressed that the Space Force will help the United States prepare itself against threats in an "evolving space environment." Other military officials echoed his sentiments.

"In military operations, space is not just a place from which we support combat operations in other domains, but a warfighting domain in and of itself," Gen. Mark Milley, Chairman of the Joint Chiefs of Staff, said in the same statement. "Our adversaries are building and deploying capabilities to threaten us, so we can no longer take space for granted. The U.S. Space Force is the necessary and essential step our nation will take to defend our national interests in space today and into the future."

"The launch of the U.S. Space Force propels the nation into a new era," Barbara Barrett, Secretary of the Air Force, said in the same statement. "An agile, lean and technologically advanced force of talented professionals will now singularly focus on protecting our U.S. national interests and security in space."

The Air Force is making an effort on multiple fronts to get more agile and responsive to emerging space threats. For example, last month, the Air Force held its first-ever Space Pitch Day in San Francisco, awarding millions of dollars in on-the-spot contracts to companies developing various technologies that could aid the nation's space security.

The Space Force will "maintain and enhance the competitive edge of the Department of Defense (DOD) in space while adapting to new strategic challenges," according to a newly released fact sheet issued by Space Force Public Affairs.

The Space Force will be headquartered at the Pentagon, like the Army, Navy, Marine Corps and Air Force, the fact sheet states. And the Space Force's duties will be wide-ranging.

You can watch a new video about the Space Force here.