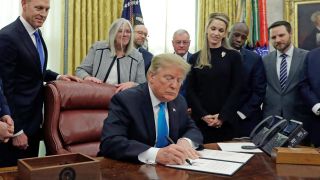 The Space Force just took a big step from sci-fi-sounding dream toward reality.

President Donald Trump signed Space Policy Directive-4 (SPD-4) today (Feb. 19), ordering the Pentagon to establish the Space Force as the sixth branch of the United States military, to go along with the Army, Navy, Air Force, Marines and Coast Guard.

But the Space Force still has a big hoop to jump through: Congress must approve the creation of any new military branch. [What Is the U.S. Space Force?]

The main goal of the Space Force is to secure and extend American dominance of the space domain, Trump and other White House officials have said. Such reasoning has drawn opposition from various quarters.

"President Trump has called space a new warfighting domain. Space is important to militaries, that’s true, but it is only a small piece of what happens up there," Laura Grego, a senior scientist in the Union of Concerned Scientists' Global Security program, said in a statement today.

"Eighty percent of the nearly 2,000 satellites are civilian, providing critical communications and economic services for humanity’s well-being," Grego added. "We need to take care of space. If concentrating authority in a space force creates an incentive for nations to build space weapons that increase the likelihood of conflict, it would be a profoundly bad idea."

The Space Force would initially reside within the Department of the Air Force, much as the Marine Corps is part of the U.S. Navy.

“If enacted, it will be our responsibility to deter and defeat threats in space through the U.S. Space Force, which will organize, train, and equip military space forces,” Air Force officials told Space.com in an emailed statement. “It will be our obligation to ensure unfettered access to, and freedom to operate in space, and to provide vital capabilities to joint and coalition forces.”

But Trump administration officials have said they eventually aim to push the Space Force out from under the Air Force's wings and make it a stand-alone organization.

President Trump first teased the idea of a Space Force in March 2018, in comments that made it seem like he might have been joking. But the president signed an executive order directing the creation of the new branch that June.

Many details about the Space Force — exactly how much it might cost, for example — remain unclear.

As its name suggests, SPD-4 is President Trump's fourth space policy directive. The first SPD directed NASA to get humans back to the moon as a stepping-stone to Mars. The second streamlined regulations for the commercial space sector, and the third dealt with management of space traffic.

This story was updated at 4 p.m. EST to include a statement from the Air Force.