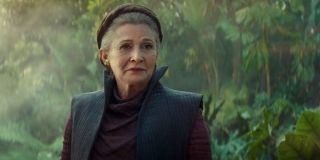 Carrie Fisher's Leia Organa Solo was intended to be the actual last Jedi in Disney's Star Wars saga, according to the late actor's brother Todd Fisher.

The idea of a "last Jedi" was introduced when the eighth film was subtitled "The Last Jedi," and those involved in the film were mum on who it was referring to — even pausing at disclosing if it was referring to a specific person or a broader ideal.

"People used to say to me, 'Why is it that Carrie never gets a lightsaber and chops up some bad guys?'" Todd Fisher said. "Obi-Wan was in his prime when he was Carrie's age!"

"The truth is that J.J. Abrams was great friends with Carrie; he had an extraordinary sense of love for her," her brother said. "They had eight minutes of footage. They grabbed every frame and analyzed it ... and then reverse-engineered it and [got] it into the story the right way. It's kind of magical."

"Star Wars: The Rise of Skywalker" is scheduled to open in theaters Dec. 20.