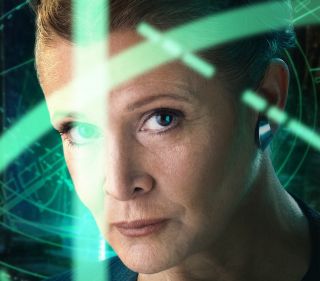 Carrie Fisher, the actress best known as Princess Leia from the "Star Wars" films, has passed away at age 60. Her daughter, Billie Lourd, who appeared alongside her mother in "Star Wars: The Force Awakens," confirmed her mother's passing in a statement Tuesday morning (Dec. 27).

"It is with a very deep sadness that Billie Lourd confirms that her beloved mother Carrie Fisher passed away at 8:55 this morning," read the statement, issued to People. "She was loved by the world and she will be missed profoundly. Our entire family thanks you for your thoughts and prayers."

Fisher suffered a heart attack while flying from London to Los Angeles on Dec. 23. After arriving at a hospital, her condition was later upgraded to "stable," but she passed away the morning of Dec. 27.

Carrie Fisher was born October 21, 1956, to singer Eddie Fisher and actress Debbie Reynolds, and landed her first major role in "Star Wars" at age 19. Fisher was best known as Princess Leia Organa, the fierce Rebel leader whose capture sparked the events of "Star Wars: A New Hope." She played Leia in all three original "Star Wars" films, reprising her role as Leia, now a General, in 2015's "Star Wars: The Force Awakens."

She continued the role in the still-untitled "Star Wars: Episode VIII," which wrapped filming in July, and will be released in theaters December 15, 2017.

Fisher was also known for her roles in films such as "The 'Burbs," "When Harry Met Sally," "The Blues Brothers," and "Shampoo." Aside from acting, she was also an author, having penned several books including her novels "Postcards From The Edge," "Surrender The Pink," and "The Best Awful There Is," as well as her non-fiction work "Wishful Drinking," "Shockaholic," and her most recent book, 2016's "The Princess Diarist." Fisher adapted "Postcards From the Edge" for a 1990 film, and wrote drafts of several other movies including "Last Action Hero," "Sister Act," and "The Wedding Singer" and episodes of "Rosanne" and "The Adventures of Young Indiana Jones."

Fisher is survived by her mother, actress Debbie Reynolds, and her daughter, Billie Lourd.