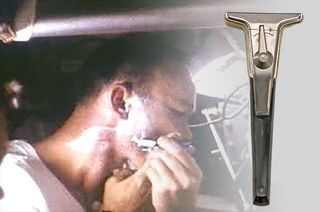 Michael Collins was filmed shaving with a Gillette Techmatic safety razor during the Apollo 11 mission in 1969.
(Image: © NASA/Smithsonian)

Gillette is commemorating the first moon landing 50 years after its razor was used on board NASA's historic Apollo 11 mission.

"When man first walked on the moon, he did it with a clean shave. Astronauts on the Apollo 11 mission used Gillette razors aboard their spaceflight. Fifty years later, the Apollo Collection pays homage to the marvels of man and technology," Gillette wrote on Facebook.

Related: How to Shave Your Head in Space (Video)

The handle on the limited edition Apollo Collection razor is shaped to resemble a crater-pocked moonscape with "a historically inspired 'one small step' boot imprint on its front," describes Gillette. The handle's reverse is adorned with NASA's Apollo- and current-era agency insignia, affectionately known as the "meatball."

The Apollo 11 mission saw commander Neil Armstrong and lunar module pilot Buzz Aldrin land at the Sea of Tranquility as command module pilot Michael Collins orbited the moon on July 20, 1969. All three crew members had shaving supplies among their personal effects, including a Gillette Techmatic safety razor that Collins was filmed using during the voyage from Earth to the moon.

Collins donated the moon-flown razor to the Smithsonian's National Air and Space Museum in Washington, DC in 1985, where it remains today.

The same model Gillette razor was also used on Apollo 12, the second mission to land humans on the moon, in November 1969.

As a part of Gillette's Razor Maker line, the Apollo Collection razor handles are among a limited quantity created at the company's Boston headquarters. Each is printed using stereolithography (SLA) printing technology from Formlabs, a Massachusetts company that designs and manufactures 3D-printing systems.

Available only from Gillette's website, the Apollo Collection by Razor Maker razor retails for $65.

With the release of the Apollo razor, Gillette has joined a number of well-known brands that have produced tributes to the 50th anniversary of the first moon landing, including Budweiser, Case Knives, Dairy Queen, Krispy Kreme, LEGO, Oreo, Omega, Timex, Velcro, Victorinox Swiss Army, Zero Halliburton and Zippo.

As a historical aside, contrary to Gillette's Facebook post, Armstrong and Aldrin were both in need of a shave when they became the first people to walk on the lunar surface, as was captured in photographs of both astronauts.

"Sure wished I had shaved last night," remarked Aldrin, before donning his helmet to embark on the history-making moonwalk.