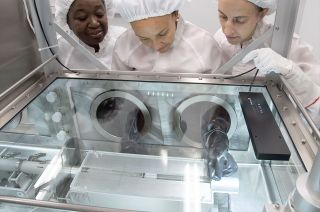 NASA has unsealed one of its last untouched samples of Apollo moon rock to prepare for the return of new material by future lunar missions.

Scientists at Johnson Space Center's Lunar Curation Laboratory in Houston opened the Apollo 17-recovered sample on Tuesday (Nov. 5). The 1.5-inch-wide (4-centimeter) tube holding the small stash of moon rocks and dust was sealed by astronauts Gene Cernan and Harrison Schmitt during the second of their three moonwalks on Dec. 12, 1972.

The 15 ounces (430 grams) of moon material, collected as part of a core sample taken near the rim of Lara Crater, had remained unopened but not under vacuum since being brought to Earth 47 years ago.

"The analysis of these samples will maximize the science return from Apollo, as well as enable a new generation of scientists and curators to refine their techniques and help prepare future explorers for lunar missions anticipated in the 2020s and beyond," said Sarah Noble, the program scientist for NASA's Apollo Next-Generation Sample Analysis (ANGSA) initiative at the agency's headquarters in Washington, D.C.

"We are able to make measurements today that were just not possible during the years of the Apollo program," said Noble in a statement.

The Apollo program brought a total of 842 pounds (382 kilograms) of moon rock and regolith (or soil) back to Earth. Most of those samples, which were gathered by 12 astronauts on six moon-landing missions, have been the subjects of past and present studies. The majority of the samples are held today at Johnson Space Center, with a smaller collection stored off-site for safe keeping.

The sample opened on Tuesday, assigned the ID number 73002, was the upper segment of a 2-foot-long (0.6-meter) "drive tube." The bottom segment, sample 73001, is slated to be opened in January. Together they are the first untouched Apollo moon rock samples to be opened since the 1970s.

The drive tube was used to collect core samples that preserved the vertical layering within the soil, including information about landslides on the moon, and a record of the volatiles trapped within the lunar regolith, perhaps even those escaping from along the Lee-Lincoln Scarp, a fault at the Apollo 17 landing site.

"Opening these samples now will enable new scientific discoveries about the moon and will allow a new generation of scientists to refine their techniques to better study future samples," said Francis McCubbin, NASA's astromaterials curator at Johnson.

Advances in research techniques, including non-destructive 3D imaging, mass spectrometry and ultra-high resolution microtomy, will allow for a coordinated study of samples 73001 and 73002 at an unprecedented scale. In March, NASA chose nine science teams at agency centers, federal laboratories and universities to examine the pristine samples using these new technologies and processes.

Two other drive-tube samples, one each from Apollo 15 and Apollo 16, will become the only lunar material caches to be kept untouched.

Before opening sample 73002, the still-sealed tube underwent X-ray computer tomography at the University of Texas Austin to produce a high-resolution, 3D image of the regolith within. The imaging helped scientists understand the sample's structure before unsealing the container and will aid in the dissection and distribution of the sample to the research teams now that it is open.

The scan will also help protect fragile soil components from damage during the tube's processing and provide details of the individual grains and smaller samples, known as "rocklets."

Following the X-ray analysis, the samples will be removed from their tube using specialized tools inside a science glovebox filled with ultra-pure dry nitrogen. The regolith will be portioned into 0.25 inch (0.6 cm) segments, providing scientists the opportunity to understand variation along the length of the core.

This is the first time that NASA has processed a drive tube like this in more than 25 years and curation scientists have been hard at work over the past few months rehearsing the process.

"I grew up on the stories of Apollo, they inspired me to pursue a career in space and now I have an opportunity to contribute to the studies that are enabling the next missions to the moon," said Charis Krysher, the lunar sample processor who was tasked with unsealing the tube on Tuesday. "To be the one to open a sample that hasn't been opened since it was collected on the moon is such an honor and heavy responsibility, we're touching history."

Unlike 73002, the lower drive tube sample 73001 was sealed on the moon in a special vacuum container and then placed in another vacuum container and sealed again once on Earth. According to NASA, that sample will be opened after scientists finetune their plan for capturing the moon's gases that were caught in the container along with the sample itself.

Once 73001 is unsealed, it will be processed in a science glovebox and similarly shared with the scientific teams selected for the ANGSA research.

Click through to collectSPACE to watch an X-ray scan of the Apollo 17 core sample.