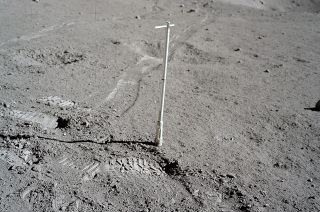 A drive tube pounded into the lunar regolith by Apollo 17 astronauts Gene Cernan and Harrison Schmitt collected a core sample that has remained sealed for almost 50 years. It will now be opened for scientific study using modern technology and techniques.
(Image: © NASA)

NASA is about to open one of its last remaining lunar samples that was sealed by Apollo astronauts while on the moon nearly 50 years ago.

The space agency on Monday (March 11) announced that it has selected nine science teams to study the still-pristine moon material using techniques that were not available when the samples were collected in the early 1970s.

"When the previous generations did Apollo, they knew that the technology that they had in that day was not the technology that we would have in this day. So they made a determination that they were going to preserve samples, because they knew there would be a day when better technology would be able to better assess the history of the moon," said NASA Administrator Jim Bridenstine, who revealed the selection during an address at the Kennedy Space Center in Florida.

Related: With Vintage, Awe-Inspiring Footage, 'Apollo 11' Will Take You Back to the Moon

"We have nine teams that will be examining unopened samples that have come back from the moon and we feel like we can do that because there are more lunar samples on the horizon," said Bridenstine, referencing NASA's efforts to resume sending probes and humans to the surface of the moon.

The Apollo 15, 16 and 17 missions returned a total of nine containers of sealed lunar material, representing 3.7 pounds (1.7 kilograms) out of their much larger hauls of exposed moon rocks. Only three sealed samples remain unopened today, one from each mission. (The six other samples were opened in the 1970s.)

Six of the nine selected teams will look at 73001, an approximately 1.8-pound (809-gram) sample that was collected and placed into a vacuum-sealed tube by Apollo 17 astronauts Harrison Schmitt and Gene Cernan in 1972. The sample is still encased in a "drive tube" that was pounded into the lunar regolith (or soil) to collect a core of material, preserving the layers as they existed on the moon.

"We're hoping the sealed sample will have never seen Earth's atmosphere, that the vacuum seals on the tube have held, so when we open it, the gas inside is gas from the moon," said Ryan Ziegler, NASA's Apollo sample curator at the Johnson Space Center in Houston, in an interview with collectSPACE.com.

The other three teams will be studying samples from Apollo 15 and Apollo 17 that were delivered to Earth unsealed, but were either kept frozen or stored in helium. The majority of the 842 pounds (382 kilograms) of lunar rock and regolith returned by the six moon landing missions were opened and stored in nitrogen.

"Rather than storing them in nitrogen for all these years, we have stored them in helium — the helium samples came from Apollo 15. And the Apollo 17 samples, the frozen ones, were not frozen the entire time. They came back under normal temperature and pressure conditions, they were opened very quickly in the lab and within a week or two sub samples were frozen and have been sealed away frozen ever since," explained Ziegler.

Teams from the NASA's Ames Research Center, the Bay Area Environmental Research Institute and the U.S. Naval Research Laboratory will look at the frozen and helium-held samples to see how volatiles like water are stored in the radiation environment of the lunar surface and how airless bodies are affected by exposure to the space environment.

The other six teams studying the Apollo 17 sealed sample include scientists from Ames, NASA's Goddard Space Flight Center, the University of Arizona, University of California Berkeley, University of New Mexico, Mount Holyoke College and the Planetary Science Institute. The research will focus in part on how exposure to the space environment affects the moon's surface, how small organic molecules are preserved on the moon and how micrometeorite and meteorite impacts may have affected the geology of the lunar surface.

The studies will also include looking at samples that may have been cold enough for water to freeze, called a "cold trap," a first for research inside a lab. The Apollo 17 sample at the bottom of the drive tube was raised from a depth below 9 inches (22 centimeters), where it may have been frozen (-10 degrees Fahrenheit [-23.15 degrees Celsius or 250 Kelvin]) at the time it was sealed.

Before any of the studies can commence, though, the scientists need to meet to discuss the best way to open the sealed sample to avoid contaminating the lunar material and maximizing the science to be gained.

"So that's the biggest question," Ziegler told collectSPACE. "How to open the sealed sample is the hardest question, and until the scientists had been selected and we knew the analyses they wanted to make, we couldn't work out the exact details on how to open the sample."

"We have the engineering schematics for the containers and we have an idea of how we would do it, but while we are experts in curation and we are good scientists, these are also expert scientists. So we need to find out what they want to do and find the right way to do it," said Ziegler, adding that the group would likely meet at the Lunar and Planetary Science Conference being held March 18 through March 22 in The Woodlands, Texas.

The new studies, which NASA is underwriting at a total of $8 million, was originally proposed by Thomas Zurbuchen, NASA associate administrator for science at the agency's headquarters in Washington, DC.

"By studying these precious lunar samples for the first time, a new generation of scientists will help advance our understanding of our lunar neighbor and prepare for the next era of exploration of the moon and beyond," Zurbuchen said in a statement. "This exploration will bring with it new and unique samples into the best labs right here on Earth."