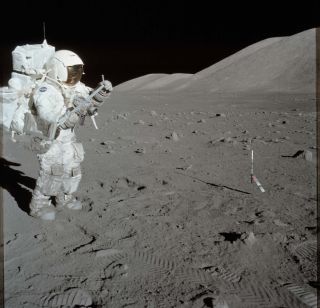 Nine lucky science teams have been given the chance of a lifetime: to study moon rock samples collected by the Apollo program that have been sealed for decades.

The teams' investigations will tackle questions touching on geology, space weathering, meteorite impacts and more. The samples were sealed for future study, when researchers could use more-advanced equipment than was available in 1972, the year the final Apollo mission returned.

"We have three lunar samples that have come back from the moon that have never been opened," NASA Administrator Jim Bridenstine said during a news conference held today (March 11) to mark the release of President Donald Trump's 2020 budget request, or "Moon to Mars" as NASA is calling it. "When the previous generations did Apollo, they knew that the technology that they had in that day was not the technology that we would have in this day."

But NASA has decided that with technological advances and the country's plans to return to the moon, it's time to open up those long-sealed samples. The agency announced its intentions last year.

"We feel like we can do that because there are more lunar samples on the horizon, where we're going to be able to learn more than we've ever learned about the moon before," Bridenstine said. "So, I'd like to thank, if it's OK, the Apollo generation, for preserving these samples so that our generation could have this opportunity."

"By studying these precious lunar samples for the first time, a new generation of scientists will help advance our understanding of our lunar neighbor and prepare for the next era of exploration of the moon and beyond," Thomas Zurbuchen, associate administrator for NASA's Science Mission Directorate, said in a statement. "This exploration will bring with it new and unique samples into the best labs right here on Earth."

Before the teams can actually open the samples, they'll need to work with the rocks' NASA caretakers to develop practices to ensure that opening the sealed material doesn't contaminate the rocks.

In addition to the samples themselves, NASA is also providing $8 million in funding to the selected teams.