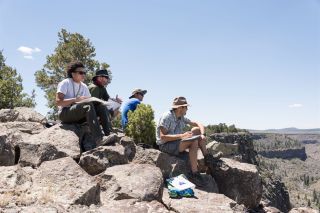 A team of astronaut candidates maps geologic features in northern New Mexico in the summer of 2018.
(Image: © Norah Moran/NASA)

Perhaps it's counterintuitive that astronauts, the humans being sent hundreds of miles away from any rocks, should care about geology.

Nevertheless, learn geology they do, through a special training course tailored to the work astronaut candidates will be able to do from the International Space Station — or on the first interplanetary exploration missions since the Apollo program.

"Being able to understand what something looks like from a few hundred miles above the planet's surface, whether it's the Earth or the moon or Mars, is part of this," Cindy Evans, head of the Astromaterials Research and Exploration Science Division at NASA's Johnson Space Center (JSC) in Houston, told Space.com. "What we try to introduce is that all of these different perspectives are important, none of them are stand-alone, that it takes them all to pull together a complete picture. It's always been crucial for understanding the geology of the Earth; we know that it's going to be crucial for understanding the geology of the moon or the geology of Mars."

Three training classes of astronauts have taken part in the decade-old field training program. The program includes intensive classroom time to learn the basic principles of geology, but the focus is on getting out in the field to see rocks in their natural environment, where the candidates can touch the manifestations of those discussions.

"They're trying to wrap their minds around it, but when they see it in the field, you can really see the light bulb go off in their head," Jose Hurtado Jr., a geologist at the University of Texas at El Paso, who has been working with the program for about a decade, told Space.com. "They start to understand why it's going to be important for their future careers."

At each site, the program leaders work to ensure the trainees get a real sense of how geology itself works. "We don't have them memorize rock names or mineral names, we try to have them focus on the exploration mindset," Trevor Graff, a planetary scientist working for NASA contractor Jacobs at JSC, told Space.com. In particular, he wants trainees to understand what geologists do in the field and why.

Out in the field

The current astronaut training class explored Rio Grande Del Norte National Monument in northern New Mexico last summer and will be headed to the San Francisco Peaks region in Arizona later this year. That area of Arizona holds a storied role in geology and in space exploration alike. "The neat part is going to these historic places, you can actually pick out photos of Apollo astronauts training on the same lava folds," Graff said. "They're following in the footsteps of people who have been there before."

But the training program's destination doesn't just look back to the past: It is also informed by the destinations astronaut candidates could one day find themselves exploring beyond Earth. "The San Francisco volcano field where we're going to be has world-class examples of the kind of volcanic features you may see on the moon or Mars," Hurtado said.

While they're familiarizing themselves with geology itself, the trainees are also learning to mimic how geologists think and work. "Geology is very different in many ways from other sciences," Barb Tewksbury, a geologist at Hamilton College in New York who has been working with the program for a decade, told Space.com. "We have the greatest experiment, and it's all cooked and done and it's the Earth, and we're trying to figure out what the conditions of the experiment were."

Geologists in the field have to start with a plan, but also adapt that plan in response to what they find on the ground. "Geologists don't just drive around or run around collecting samples that they take home to the lab to analyze," Tewksbury said. That would be a recipe for realizing gaps in their data far too late.

The fighter pilots among the trainees seem to intuitively grasp how this works, making decisions quickly based on limited information, she said. (Current trainees are not allowed to speak to media until they complete the program.)

This year's program is designed to challenge the trainees a little more than last year's expedition did, even as they tackle similar tasks. The program leaders have also added the complicating factor of handheld instruments that could plausibly fly on a future planetary mission.

Related: Are Moon Caves Safe for Astronauts? Earth's Lava Tubes Can Help Us Find Out

Because the program is connected to NASA's astromaterials department, which takes care of the agency's meteorites and Apollo samples, it will also train astronauts on collecting souvenirs. "We're also going to introduce during the second field season the process and the mindset behind sampling, so that you collect the best samples," Graff said. "They're going to be world treasures."

"You have to think through what tools are going to be required and how you're going to triage all the stuff that you need to get done in the time available," Evans said. "You've got a big area, you can't see everything, you've got limited resources, you can only carry so many rocks on your back, so you've got to be thinking through how you're going to best sample and collect the data that you need to collect, and you can't spend your whole life out there."

To tailor the program to astronauts, discussions emphasize how to do geology from a distance, whether that means from the space station or in preparation for landing on another planetary body. While small geologic features won't necessarily be visible, there's plenty that is.

"The orbital perspective gives you a great viewpoint," Hurtado said. For example, in 2009, astronauts aboard the space station captured photographs of some of the earliest stages of a volcanic eruption — phases scientists usually don't see — unfolding at Sarychev Peak northeast of Japan. Their images unleashed a frenzy of hypotheses among volcanologists about how to explain what was happening. (Last summer, the trainees spoke with government volcanologists tracking the then-active Kilauea eruption.)

The training also stretches beyond rocks and into topics like atmospheric science, oceanography and land-use patterns to prepare astronauts for the full range of Earth-observation opportunities available from orbit.

When it comes to worlds beyond Earth, that distance could shrink someday soon. These astronaut candidates could be among the first humans to set foot on other worlds since the end of the Apollo program in 1972, which means they need to be prepared to deal with how planetary science manifests itself beyond Earth.

For astronauts who become used to the view from orbit, that perspective will still be crucial beyond Earth. "All surface exploration is going to start with remote-sensing data anyhow," Evans said. By seeing the same terrestrial features from different viewpoints, planetary explorers will be better-equipped to understand planetary features elsewhere before touching down.

And if they do touch down, they'll have plenty to explore. If her astronaut trainee students could make one geological discovery in the course of their careers, Tewksbury said, she knows precisely what she hopes they would find — evidence of life on Mars. "I think that would be incredible, I mean, that's the holy grail," she said.

And it's fundamentally a question of geology, she said. "If it's there, it'll be in the rock record."