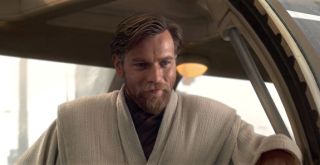 Ewan McGregor is in talks to once again play Star Wars' Obi-Wan Kenobi, this time in a Disney+ show, reports Deadline. According to the Hollywood trade, this show was originally plotted out as a movie but plans changed; back in August 2018, McGregor said he would be up for reprising his role as the Star Wars Jedi but he hadn't been approached about a movie.

The 48-year-old actor last appeared on-screen as Kenobi in 2005's "Revenge of the Sith," although he recorded lines for a cameo in 2015's "The Force Awakens."

Speculation about McGregor reprising his role as Kenobi has been rampant since the Walt Disney Company acquired Lucasfilm in 2012.

No further details were mentioned, however Disney's D23 Expo is scheduled to take place Aug. 20 through Aug. 25 in Los Angeles.