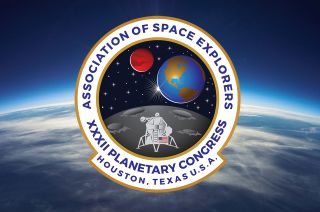 The Association of Space Explorers' XXXII Planetary Congress in Houston, Texas is bringing together astronauts and cosmonauts to "Celebrate Apollo, Inspire the Future."
(Image: © ASE)

More than 130 astronauts and cosmonauts from across the globe — the largest gathering of international astronauts in history — came together in Houston, Texas on Monday (Oct. 14) to begin a week-long conference commemorating the 50th anniversary of the first moon landing. The event marks only the fourth time the Association of Space Explorers' (ASE) Planetary Congress has been held in the United States since 1985.

"Each year we are invited by a different nation to share the knowledge we acquire from space exploration and to inspire the next generation of scientists, engineers and explorers," said Bonnie Dunbar, chair of the XXXII (32nd) Planetary Congress and a former NASA astronaut. "So, it is only fitting to have the Congress return to the U.S., to the location where our journey to the moon first began more than 50 years ago."

Meeting under the theme "Celebrating Apollo, Inspiring the Future," the astronaut and cosmonaut delegates representing 18 countries will help lead and attend panel discussions about the past, present and future of human space exploration, as well as meet with students and the public across Texas to share their flight experiences and the opportunities and challenges of returning to the moon and traveling on to Mars.

"Our goal is to promote the benefits of human space exploration, to advocate for international cooperation in that regard, to promote better stewardship of our own planet and inspire the next generation of explorers," said Michael Lopez-Alegria, the president of the ASE International Executive Committee and a veteran of four spaceflights totaling more than 257 days in Earth orbit.

The panels, which are open to the public or will be streamed online for the public to watch, will be held at NASA's Johnson Space Center, at its visitor center, Space Center Houston, and at Rice University.

"There will be some sessions that are devoted to the legacy of Apollo with a panel filled with Apollo fliers sharing firsthand accounts of how it was to participate in those flights," Lopez-Alegria told collectSPACE.com in an interview. "And then another panel will be more about the societal impact of the moon landing, with people who were affected by it and historians."

Other sessions include a discussion about the medical challenges of working beyond Earth orbit, developing spacesuits and other technologies for lunar and Mars exploration and issuing affecting crew safety on current and future missions. Presenters include retired cosmonaut Oleg Kotov, deputy director of Russia's Institute for Biomedical Problems, former JAXA astronaut Chiaki Mukai, the vice president of the Tokyo University of Science in Japan, and retired European Space Agency astronaut Reinhold Ewald, who is now a professor at the University of Stuttgart in Germany.

Given the location of the Congress, more than a few members of NASA's current astronaut corps will join their former colleagues.

"We almost always have at least a handful, but this year, I expect it to be a pretty big handful," said Lopez-Alegria. "We have quite a few that are participating on panels themselves, and I expect that there will be some involved in the technical sessions as spectators and some of the social events as well."

The Association of Space Explorers is a not-for-profit professional and educational organization of more than 400 people who have orbited Earth at least once. The 31st Planetary Congress was held in Minsk, Belarus in 2018. The prior U.S. host cities were Washington, DC (1992), Salt Lake City (2005) and Seattle (2008).

The 32nd Planetary Congress began Monday morning with the astronauts and cosmonauts convening at Space Center Houston for the opening ceremonies — including a special message from a group of explorers who could not be there on account of being off the planet.

"For 50 years, we've built upon the human and technical achievements of the Apollo program and we continue to do so here on board the International Space Station," said Expedition 61 flight engineer Andrew Morgan of NASA in a video recorded aboard the orbiting laboratory.

"We're gaining the knowledge and experience not only to return to the moon, but also to carry us beyond to Mars and other deep space destinations," said Expedition 61 commander Luca Parmitano with the European Space Agency.