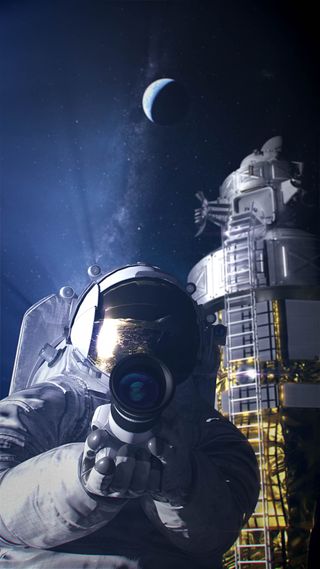 Artist's illustration of an astronaut in the xEMU spacesuit with the Human Landing System in the background.
(Image: © NASA)

NASA is looking to the private sector to help mature and manufacture the spacesuit it will need for its future moon missions, the first of which is targeted for 2024.

The space agency plans to build and certify the new spacesuit, which is known as the Exploration Extravehicular Mobility Unit (xEMU). The first few suits, made in house, will be tested on the International Space Station in 2023 and worn by the astronauts who touch down on the lunar surface in 2024 on the Artemis III mission. (Artemis is NASA's ambitious crewed lunar-exploration program, which aims to establish a long-term, sustainable human presence on and around the moon by 2028.)

But NASA wants some aid from industry thereafter. On Friday (Oct. 4), the agency published a request for information (RFI), asking for industry feedback to "refine and mature the acquisition strategy for production and services for lunar spacesuits," as NASA officials explained in a statement. (You can view the RFI here.)

"After Artemis III, NASA plans to transition responsibility for production, assembly, testing, sustaining and maintenance of a fleet of flight and training spacesuits and associated hardware to U.S. industry," NASA officials added.

The xEMU could be adapted for other destinations besides the moon, such as Mars. It will use more advanced technology than the 50-year-old Apollo moon spacesuits and allow astronauts to walk comfortably on solid ground, unlike NASA's current crop of spacesuits, which are tailored for spacewalks outside the ISS.

NASA plans to get industry feedback on how to improve the initial spacesuit design, how industry would produce the new threads, how to produce and maintain tool kits and hardware for the moonwalks, and how each company would improve the suits over time. The discussion will also include how to commercialize parts of the suits or associated items (such as tools) for non-NASA customers.

Lunar astronauts will have a lot of design changes to look forward to, compared with older types of spacesuits. One of the most famous parts of the Apollo missions in the 1960s and 1970s — the bunny hop astronauts used to move around on the lunar surface — will no longer be needed, because the xEMU will incorporate significant mobility improvements, NASA officials said. For example, the lower torso of the spacesuit will use bearings and other components to let astronauts walk or even kneel while doing their experiments and geology work.

NASA also plans changes to make it easier to accommodate different body sizes, an issue that cropped up on the ISS earlier this year when spacesuit fit requirements postponed the first all-female spacewalk from March to October, if all goes according to plan. There will be spacesuit changes for comfort and fit, as well as a new life-support system with easily swappable components to accommodate technology improvements.

"The new exploration suit can be used in spacewalks that may vary with dust, thermal conditions, operational requirements such as walking, driving rovers, or collecting samples, or gravity," NASA officials added in the statement.

The agency plans to use variations of the xEMU spacesuit at the ISS, on the future Gateway lunar space station and on future missions to Mars.