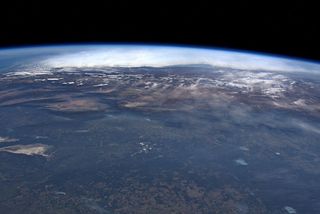 European Space Agency astronaut Luca Parmitano shared this image on Twitter on Sept. 23, 2019, with the caption, "Our world burned alive. Together with our future. #AmazonFires."
(Image: © ESA)

Italian astronaut Luca Parmitano sent the United Nations an important message about climate change and the need to protect the future of our planet in a new video from the space station.

Parmitano is one of six Expedition 61 crew members currently on the International Space Station. When asked which planet Parmitano would most like to explore as an astronaut, his answer was simple: Earth.

"From up here, the answer is clearer than ever," Parmitano said in a video from the European Space Agency. "There is absolutely no place like home."

Parmitano launched to the space station for his second mission on July 20 and on Oct. 2, he took over as the first-ever Italian space station commander.

In the video, Parmitano addressed leaders attending the United Nations Climate Summit, which took place in New York on Sept. 23. The astronaut emphasized the need to act now and work together to stop climate change, noting the impacts on the world's coral reefs, Arctic glaciers and forests.

"Our planet Earth, with its vast and varied terrain, is a constant source of wonder to astronauts on the International Space Station," Parmitano said in the video. "Every time we look out the cupola window, we see a new and incredible view … [that] reminds us just how precious and fragile our Earth is."

Parmitano called attention to the impact humans have had on the planet and the effects of global warming, which he linked to the intense heat waves experienced around the world and the growing intensity of hurricanes.

"Human impact is visible and tangible, and unless we take coordinated action now to reduce carbon dioxide emissions and stop, if not reverse, global warming, we stand to lose much, much more," Parmitano said. "The Paris Agreement and the work you do as leaders in the United Nations 2019 Climate Action Summit in New York is important."

However, to limit climate change and global warming, the focus of international organizations needs to turn into real action, Parmitano said.

"The race is on — but it's a race against time and we must win. It's time to act now, across national borders," Parmitano said in the video. "We must go beyond what we're doing now to protect the future of our planet for the good of those who will come long after we're gone."