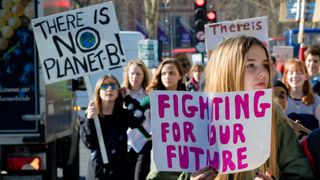 On Friday (Sept. 20), students around the world will walk out of their classrooms and gather in coordinated protests to highlight the global crisis created by climate change. The goal? To get elected officials and industry leaders to actually act to stop the looming catastrophe.

Climate change poses a dire threat to humanity, and politicians aren't doing enough to find solutions, protest organizers wrote on the Global Climate Strike website. Greenhouse gas emissions are a primary driver of global warming, but leaders have balked at abandoning fossil fuels, even as global temperatures continue to climb.

Strikes and protests by students in more than 2,500 locations aim to show that the younger generations won't stand idly by while their future — and their planet — hang in the balance, according to Global Climate Strike.

The strike follows a summer of extreme weather linked to climate change: unprecedented global heat waves, wildfires and ice loss from glaciers. In July, three studies found that the global climate is changing more quickly than it has in the past 2,000 years, Live Science previously reported.

Sixteen-year-old Swedish climate activist Greta Thunberg, who is currently visiting New York City, is one of the strike's key organizers. Thunberg will speak at a Friday demonstration at Foley Square there at 12 p.m. local time, after which protesters will march to Battery Park, Vox reported.

Thunberg will also address the United Nations (U.N.) Climate Action Summit on Sept. 23. The emergency meeting is being convened so that world leaders can present "concrete, realistic plans" for reducing greenhouse gas emissions, with the goal of reaching zero emissions by 2050, according to a U.N. statement.

Thousands of protests are planned for Friday — just three days prior to the summit — and collectively, they will be the biggest climate action in history, according to The Guardian.