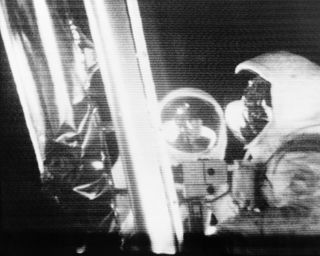 A photograph of Neil Armstrong and Buzz Aldrin on the moon produced from the live telecast made during the moonwalk on July 20, 1969.
(Image: © NASA)

In case you haven't heard, the Apollo 11 mission that landed humans on the moon happened exactly 50 years ago — but why does that temporal inevitability seem so compelling to so many people?

Psychologists have said that when events tie directly to our self-constructed identities, anniversaries can be a powerful way of marking time. This is true for individuals and societies alike. None of this research looked at Apollo specifically, but psychologists study how people respond to other key global events, as well as how people think about personal milestones like birthdays or anniversaries of significant moments.

"Generally, we know if we revisit a specific anniversary, we know that that thing happened, say, quite a number of years ago, and it's rare that we forget the actual objective time stamp of that event," Anne Wilson, a psychologist at Wilfrid Laurier University in Canada, told Space.com. "But often when we revisit anniversaries, it tends to increase the sense of subjective closeness, so we feel like that event is — it feels much more vivid, and it feels much more close to us, at least temporarily."

And chances are, people who were alive for the moon landing are revisiting memories of more than simply the basic historical facts of the event. "[Anniversaries] really jog our memory about all the other things that happened around that time and how we felt," Johanna Peetz, a psychologist at Carleton University in Canada, told Space.com.

"It's very intertwined," Peetz said. "Hearing about an anniversary of a global event would always remind you of what your life was like when you actually learned about it the first time."

Peetz added that the effect is most powerful for moments an individual can actually remember for themselves. But Wilson said that if an event has a close enough tie to someone's sense of their identity, missing out on the original moment doesn't necessary deprive anniversaries of their psychological force.

"[People] can have memories on the basis of what they actually experienced, and they can also have essentially a memory that's more based on semantic knowledge," Wilson said, referring to images and footage of, say, the Apollo 11 moonwalk. Those memories retain different flavors but can share similar effects. "To some degree … something that people really experienced and something that they remember on the basis of those images can be conflated a little bit, because you have the same sort of visual cues."

That's particularly true when an event is tied to the mental picture someone has built about themselves — that they're an American or a space fan, perhaps. "We also have social identities or collective identities, so part of our sense of self comes from the groups to which we belong," Wilson said. "Even if it's not something that we personally participated in … it can reinforce their sense of, say, national pride and allow them to feel a sense of continuity with the positive aspects of their national heritage."

And it's plausible the impulse to dwell on an anniversary may be stronger when a round number of years has passed since the original event, like the half-century moment for the Apollo moon landing. The phenomenon is well documented for milestone birthdays, like 30 or 40, which can inspire people to form new habits or undertake major goals like running a marathon.

"There's the idea that round numbers give you a sense of a fresh start," Peetz said. "I do think the same might be true if you highlight those major landmarks and especially if they're round anniversaries, that maybe it gives people a sense of, OK, one decade has ended, one era has ended, and a new one is starting."

What that sense of transition might do for us is more of a mystery.

"In general, I don't think there's enough research on what anniversaries really do," Peetz said. "Most of the research is on memory, so we don't really know what does it do beyond the remembering and people's emotions. Does it actually affect their goals, too, and how people live their life?"

That's a particularly poignant question at this Apollo anniversary, when NASA is looking back on its greatest achievement and contemplating the agency's ambitious agenda of returning humans to the moon by 2024. Only time will tell whether, in 55 years or so, humans will look back again at a powerful moment when the world felt a new era of space exploration begin.