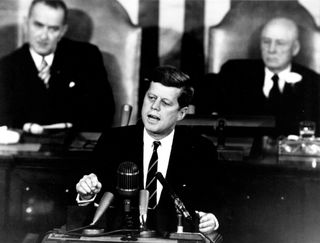 President John F. Kennedy speaks before a joint session of Congress, May 25, 1961. In this address, the president announced that the United States would aim to put astronauts on the moon by the end of the 1960s.
(Image: © NASA)

Apollo 11 was truly a giant leap, but it was no miracle.

On May 25, 1961, President John F. Kennedy announced before a special session of Congress that the United States planned to put people on the moon, and return them safely to Earth, before the end of the decade.

At the time, the nation had a mere 15 minutes of human-spaceflight experience — and that had been accrued just three weeks earlier, when NASA launched astronaut Alan Shepard on a brief jaunt to suborbital space. Still, JFK had confidence that the agency could deliver on his bold promise.

"I think he thought it could happen," said Roger Launius, who served as NASA's chief historian from 1990 to 2002 and wrote the recently published book "Apollo's Legacy" (Smithsonian Books, 2019).

JFK came to that conclusion after discussing the idea with NASA. In 1959, just a year after it was established, the space agency had identified the moon as the long-term target for its human-spaceflight program, according to space policy expert John Logsdon. By early 1961, quick-and-dirty analyses had convinced the agency that, while a crewed lunar mission would be tough and require significant innovation, there were no technological showstoppers that would prevent it from happening.

"That formed the basis of NASA telling Kennedy, 'If you commit the resources, Mr. President, we think we can do it," Logsdon, a professor emeritus of political science and international affairs at George Washington University's Elliott School of International Affairs in Washington, D.C., told Space.com.

"So, the NASA leadership had a relatively high degree of confidence in the basic doability of a lunar-landing program, even though the way they thought it would happen at the time was not the way it happened," he added.

Getting the money, of course, was a big part of pulling the moonshot off. And JFK had a big advantage there: his vice president was Lyndon Johnson, a former majority leader of the U.S. Senate with a long history of pulling strings on Capitol Hill. (Robert Caro's famous biography of Johnson is called "Master of the Senate.")

The 1969 goal "was doable, and, politically, Johnson had Congress lined up to support it," Launius told Space.com.

A large part of that support, of course, was rooted in a desire to best the United States' Cold War rival, the Soviet Union. JFK's announcement came just six weeks after the Soviets had pulled off the first-ever human spaceflight, launching Yuri Gagarin on an orbital mission (something the U.S. wouldn't achieve until February 1962).

Gagarin's flight was the second high-profile space race victory for the U.S.S.R., which launched the first satellite, Sputnik 1, in October 1957.

"In general, Kennedy felt great pressure to have the United States 'catch up to and overtake' the Soviet Union in the 'space race,'" officials with the NASA history office wrote in a description of the moonshot announcement. (The May 1961 address to Congress, by the way, does not contain the line about choosing to go to the moon because it is hard. JFK said that in another speech, in September 1962 at Rice University in Houston.)

Conversations with NASA chief James Webb and others convinced JFK that the U.S. perhaps had a lead over the Soviets in the nascent moon race, despite these prior setbacks, the NASA historians added.

And that proved to be the case. NASA notched milestone after milestone in a stepwise fashion, working up to Apollo via the Mercury and Gemini human-spaceflight programs.

The Soviets continued to beat the U.S. to the punch through the mid-1960s. For example, cosmonaut Alexei Leonov performed the first-ever spacewalk in March 1965, three months before NASA's Ed White ventured outside his Gemini capsule.

But some of these Soviet firsts were rushed, somewhat smoke-and-mirrors affairs, Launius said, and the U.S.S.R. couldn't keep it up. The nation shot for the moon and failed; it built a huge moon rocket called the N1 but never launched it successfully. And the United States claimed the greatest space-race victory of all on July 20, 1969, when Neil Armstrong took his first small step on the lunar surface.

Editor's note: This story originally stated that NASA identified Mars as its long-term human-spaceflight destination in 1959. That's not right; the moon was the target. The story has been corrected.