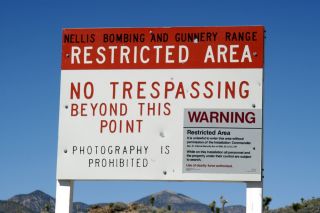 As this sign outside of Nevada’s infamous Area 51 military base reminds would-be visitors, guards are authorized to respond to trespassers with deadly force.
(Image: © Barry King/Getty Images)

Pack your shades, your sunscreen and your coziest tinfoil hat, because the late-summer event of the season is happening in Nevada's scenic Area 51, and you're invited.

According to a tongue-in-cheek Facebook event called "Storm Area 51, They Can't Stop All of Us," a ragtag army of alien hunters will meet up near the top-secret Air Force base in the predawn hours of Sept. 20, coordinate a plan of attack, then raid the grounds in search of captive aliens. Per the event's hosts (a page that posts memes and a guy who streams video games on Twitch), the delicate operation will involve running supernaturally fast — faster than the guards' bullets can fly — but will be worth it to "see them aliens."

This event is, of course, a joke (please, do not raid this or any other military base). Area 51 — a massive plot of desert about 80 miles (129 kilometers) northwest of Las Vegas — is a top-secret military installation that is infamously well-guarded by fences, radars and heavily armed "camo dudes" in white trucks. After more than 60 years of operations, the base's primary purpose remains classified and its grounds restricted to the public, fomenting an aura of spooky secrecy that has intrigued all manner of skeptics and conspiracy theorists for decades.

This much is known about the base: It's huge, covering a total of 2.9 million acres (1.2 million hectares) and 5,000 square miles (12,950 square km) of restricted airspace. Officially, the base is part of the Nevada Test and Training Range (NTTR), which is affiliated with Nellis Air Force Base; according to the Air Force, it is the largest combined air and ground space for peacetime military operations in the free world.

Since the Air Force set up shop there in 1955, Area 51 has hosted hundreds of nuclear weapons tests and has served as a training-and-testing ground for all manner of top-secret stealth aircraft, Live Science previously reported. If you believe the most popular conspiracy theory about the base, one of those aircraft may be an alien saucer that crash-landed in Roswell, New Mexico, in the late 1940s.

The U.S. military claimed that the mysterious object was a weather balloon (a 1994 Air Force report confirmed this to be true — albeit, a souped-up weather balloon designed to detect far-off nuclear fallout). However, conspiracy theorists insisted that the wreck was indeed an alien spacecraft, which had been subsequently transported to Area 51 to be broken apart, studied and put back together again. This theory gained traction in the 1980s, when a man claiming to have worked at Area 51 told the news media that he had actually seen scientists reverse engineer alien saucers there.

This man, it turns out, was a liar who never set foot on the base (he also lied about the colleges he went to and other past employment); but his stories gained enough attention that Area 51 had a new, permanent reputation as that eerie place in the desert where scientists might be tinkering with aliens. Subsequent tests of experimental, top-secret aircraft at the base have only strengthened this far-out legacy.

The allure of the mysterious desert base is undeniable. So, what happens if you do attempt to trespass into Area 51 and liberate the juicy alien secrets contained within? For starters, you'll probably be stopped at gunpoint by guards dressed in camo, as two intrepid adventurers experienced in 2016 after trying to sneak a camera through the base's back gate.

According to signs posted around the base, these infamous "camo dudes" are permitted to greet trespassers with deadly force — but, if past encounters are any indication, trespassers are more likely to be met with a hefty fine and a court date. When an SUV filled with tourists accidentally crossed into the base's restricted area a few years ago, the driver and four passengers were each cited with a $650 fine and a misdemeanor charge. The unwary passengers eventually got their charges dropped, but the driver had to pay up — and was banned from leading tours in the area for several years.

If you happen to join the joke raid proposed for this September, keep that man's story in mind. When it comes to unearthing the truth of Area 51, you may have only one shot. Choose your plan wisely.