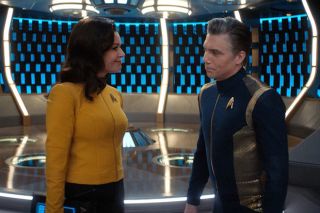 Anson Mount and Rebecca Romijn are leaving CBS All Access' "Star Trek: Discovery" after the end of the current second season, according to Deadline. The actors, who play Captain Christopher Pike and Number One, respectively, joined the show at the beginning of the season as the most promiment members of the USS Enterprise.

According to the Hollywood trade, Mount and Romijn's deals for Discovery were for a one-year commitment, with the intent they be brought on to help align the show with the continuity of the original Star Trek television series. Both characters appeared in the original 1964 series pilot, but the characters were written out afterwards.