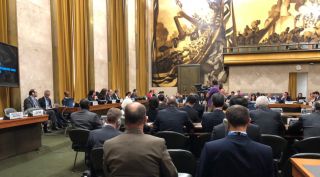 WASHINGTON — Defense Secretary Jim Mattis over the past few days traveling in Latin America was asked on several occasions to comment on the militarization of space. In public appearances and press gaggles, Mattis insisted that the United States does not want to fight wars in space and has no plans to deploy lethal weapons in orbit even as it is moving to create a new branch of the military dedicated to space.

The announcement by Vice President Mike Pence last week that the Pentagon will stand up a Space Force suddenly has drawn attention to the issue of international space security and to an accelerating arms race that, the Trump administration argues, requires a strong posture in space.

While Mattis sought to assure allies that the United States wants outer space to be peaceful, a war of words erupted over Russia's deployment in October of an in-orbit inspection satellite. According to Assistant Secretary of State for Arms Control, Verification and Compliance Yleem D.S. Poblete, Russia's actions in space were "troubling," "disturbing" and masking nefarious intent. [The Most Dangerous Space Weapons Concepts]

Poblete's comments on Tuesday at the UN Conference on Disarmament in Geneva received an unusually high level of attention and media coverage because they were viewed against the backdrop of the Space Force, said Joan Johnson-Freese, a professor of national security affairs at the U.S. Naval War College.

"Space security is usually a pretty esoteric field" that does not get the headlines that Poblete's remarks did. "Distrust about what the Russians are doing in space has been going on for quite some time, but it's now coming to the forefront because of the Space Force announcement," Johnson-Freese told SpaceNews. "It's raising the level of attention."

"We tell other countries to not do things that are threatening to us, but the threat goes both ways," she said.

The United States for decades has been unchallenged in space and now is understandably concerned about other countries disrupting U.S. access and freedom to maneuver in space. But the Trump administration's harsh rhetoric about ensuring American dominance in space is not helpful, said Johnson-Freese. It likely will create more mistrust and unwillingness to come up with much needed international agreements on acceptable behavior in space, she said. "There are legitimate reasons for all this potentially dangerous space technology but when you're in a political atmosphere such as where we are now, where no one trusts anyone, intent is very difficult to decipher and the inclination is always to go worst case."

Equal attention should be paid to international diplomacy as it being paid to the military's role in space, she added.

International mistrust in space could become a bigger problem as the commercial space industry continues to grow and demand a peaceful environment to do business. "I think the rise of the commercial industry makes an already complex situation even more complex," she said. "Once there are economic interests in space, there will be more satellites and more objects to keep track of, and the commercial sector is not going to be pleased with a hair trigger environment."

The UN has been in talks known as the "Proposed Prevention of an Arms Race in Space Treaty." One way to keep tensions from escalating is by agreeing on "best practices," said Johnson-Freese. "Politicians can't agree on the time of day but the technical experts can come up with solutions."

One reason why "rules of the road" for space are hard is that most space technology is dual-use, meaning it has both civilian and military applications. Any satellite that can can maneuver has the potential to run into another satellite and become an anti-satellite weapon, Johnson-Freese said. "This raises my concern that there is a huge window for misunderstanding, missteps and escalation."

Russia, China and other countries are accelerating their military space programs in order to narrow the significant gap between the U.S. military space capability and the rest of the world. The U.S. has been very careful about saying it will not put operational weapons in space, "while at the same time we developed an entire cadre of what we call 'offensive counter-space capabilities," she said. "This puts the U.S. in the position of saying, 'Do as we say and not as we do."

Mattis has has been clear that the Space Force is needed to protect U.S. interests in space. As far as how this force would respond to an attack, Mattis told reporters on Tuesday that he would never "tell adversaries in advance what we will do or what we will not do." However, "We will not stand idly by if someone tried to deny us the use of space; we will protect that just like in any other domain."