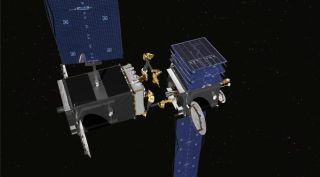 Artist's illustration of one satellite inspecting another. On Aug. 14, 2018, a US diplomat said that a Russian satellite described as a "space apparatus inspector" has been behaving very oddly on orbit, raising the possibility that it may be a space weapon of some sort.
(Image: © SSL)

A Russian satellite that launched to Earth orbit last October has been behaving oddly, raising the possibility that the craft could be some sort of space weapon, a U.S. diplomat warned.

Russia has described the satellite in question as a "space apparatus inspector," Yleem Poblete, assistant secretary for arms control, verification and compliance at the U.S. State Department, said at a conference on disarmament in Geneva yesterday (Aug. 14).

"But its behavior on orbit was inconsistent with anything seen before from on-orbit inspection or space situational-awareness capabilities, including other Russian inspection-satellite activities. We are concerned with what appears to be very abnormal behavior by a declared 'space apparatus inspector,''' Poblete said. [The Most Dangerous Space Weapons Concepts]

"We don't know for certain what it is, and there is no way to verify it," she added. "But Russian intentions with respect to this satellite are unclear and are obviously a very troubling development — particularly when considered in concert with statements by Russia’s Space Force commander, who highlighted that 'assimilate[ing] new prototypes of weapons [into] Space Forces' military units' is a 'main task facing the Aerospace Forces space troops.'"

In addition, Poblete said, the Russian Ministry of Defence has repeatedly affirmed over the past decade that it's developing anti-satellite capabilities. And a Russian Air Force official said in February 2017 "that Russia is developing new missiles with the express intent of destroying satellites," Poblete added in her 1,800-word speech, which you can read in full at the State Department's website.

Poblete's words fit the official line that has been coming out of Washington for the past few years. U.S. military officials and high-ranking politicians have repeatedly stressed that the nation's space dominance is under threat and that the country needs to be ready for a war that extends into the final frontier.

Indeed, such reasoning has led President Donald Trump's administration to push for the creation of a new military branch called the Space Force.

"The space environment has fundamentally changed in the last generation," Vice President Mike Pence said last week during the official rollout of the Space Force plan. "What was once peaceful and uncontested is now crowded and adversarial. Today, other nations are seeking to disrupt our space-based systems and challenge American supremacy in space as never before."

Pence and others generally point to Russia and China as the adversaries that the U.S. needs to monitor, citing these nations' anti-satellite aims and activities. China, for example, destroyed one of its own defunct satellites on orbit during a 2007 test, generating thousands of pieces of space junk that still litter Earth orbit.

Russian and Chinese officials have repeatedly denied any malign intent. For example, Alexander Deyneko, a senior Russian diplomat in Geneva, told Reuters that Poblete's speech yesterday contained "the same unfounded, slanderous accusations based on suspicions, on suppositions and so on."