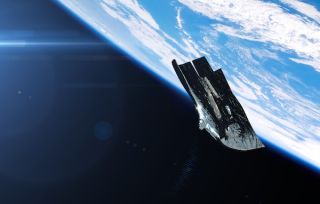 An artist's impression of the Black Knight satellite. The spacecraft has sparked a long-lived conspiracy theory.
(Image: © Future/Adrian Mann)

Sometimes the introduction of a news report will stop you in your tracks, forcing you to reread in fear you didn't quite grasp its point the first time. That was certainly the case when Mail Online published a story on Mar. 21, 2017: "An alien satellite set up more than 12,000 years ago to spy on humans has been shot down by elite soldiers from the illuminati, UFO hunters claim."

And with that, the conspiracy surrounding the so-called "Black Knight" satellite appeared to be very much alive.

It's been 120 years since conspiracists believed the existence of the Black Knight was recorded. Those who subscribe to the theory lay claim of an extraterrestrial spacecraft in near-polar orbit of the Earth, although they draw upon evidence so disparate that it's not entirely clear why people link them. What they amount to, however, is an intriguing set of ingredients that, taken together, cause people to scream loud about potential cover-ups by NASA and the government. In that sense, it is a legend that refuses to go away.

All About Space magazine takes you on an awe-inspiring journey through our Solar System and beyond, from the amazing technology and spacecraft that enables humanity to venture into orbit, to the complexities of space science.

The photo evidence that isn't evidence

A lot of the earliest discoveries that have come to be linked to the Black Knight satellite theory relate to radio signals. But a series of images from 1998 emerged that really threw the celestial cat among the pigeons. They were taken during STS-88, which was the first Space Shuttle mission to the International Space Station (ISS).

There, for all to see, were images released by NASA that showed a black object hovering above the Earth in low orbit. And it wasn't long after the images were thrust in front of a hopeful public before people were performing some conspiratorial sums and sharing them with the wider world.

By way of explanation, astronaut Jerry Ross pointed out that the ISS was in the midst of being constructed when the images were taken. The U.S. team, he said, was on its way to attach the American module to the one created by the Russians and, as part of that work, they had taken four trunnion pin thermal covers with them. The task was to wrap these around four bare trunnion pins, these being rods that attached the module to the shuttle while it was being transported. This would act to prevent heat loss from the exposed metal.

Unfortunately, during one of the extravehicular activities (EVA) things went a little bit wrong and one of the covers came loose from its tether, causing it to float away along with some other items. "Jerry, one of the thermal covers got away from you," said commander Robert Cabana, and it soon became apparent that they wouldn't be getting it back.

Subsequently captured on camera, this black object was given the object number 025570 by NASA, and a few days later the object fell from orbit and burned up. Far from being an extraterrestrial object, the black item floating in space was nothing more than a blanket.

Much of this has been placed on the record. Former NASA space engineer James Oberg, who personally knows Ross and the person who took the photos, Sergei Krikalev, has gone to great lengths to show that these supposed images of the Black Knight have less fanciful origins.

"Before leaving NASA I led the trajectory design team that produced the mission profile," Oberg told All About Space. "Every step of the way there is consistency with what I learned as a lifelong spaceflight operations specialist: why the blankets were needed, why one of them came loose, why it floated off the way it did. The difference is, for the general public all these features are unearthly to folks who are only familiar with Earthside principles of heating, working, motion and dozens of other never-before-encountered-in-history aspects of outer space."

Given Oberg's debunking you'd think the matter would have drawn to a close. But no. Since the images were shared far and wide, conspiracy theories have continued.

"They are probably some of the weirdest-looking 70 mm photos to ever come out of the space shuttle program," Oberg said. “And apparently a NASA website update made the original links inoperative, sparking concerns over a cover-up. All normal journalistic practices — determining the timeline, asking witnesses, searching for the wider context — were skipped."

By absorbing the images into a growing body of "evidence," they were seen as definite proof that the Black Knight alien satellite really was out there. Reaching that conclusion, however, has required greats leaps of faith, and has also needed past discoveries to be forced into the overall story. Firm believers have had no problems going right back to 1899 in pursuit of such "truth" but, just like the photographic records, each piece of supposed evidence brought to the table so far has been explained away without falling back on the Black Knight myth.

So what happened in 1899? That year Nikola Tesla began to record some very odd signals, seemingly from outer space. The accomplished Serbian-American electrical engineer had a passion for wireless technology, and he was in the early throes of an experimental wireless transmission station called Wardenclyffe Tower in Shoreham, New York. While in his barn-like laboratory in Colorado Springs, he noted the unusual signals and speculated they had come from another planet, a claim greeted with disbelief and scepticism.

Related: Fermi Paradox: Where Are the Aliens?

"The very first source of non-terrestrial radio waves was discovered in the 1930s, and that was from the centre of our galaxy, which is the most powerful radio source in the sky at many frequencies," NASA Jet Propulsion Laboratory scientist Varoujan Gorjian explained. "It wasn’t until the 1960s that the technology evolved to detect the first pulsars. If what Tesla detected was a real signal and not an artefact of his instrument, it most likely came from Earth."

So why does talk of the Black Knight persist?

People continued to use Tesla's findings to bolster claims for the Black Knight. They also took on board the work of a Norwegian engineer called Jørgen Hals, who found that radio signals he transmitted were being echoed back to him a few seconds later. We now know these as long delayed echoes, and Hals was the first person to observe them.

The fact that we don't have a confirmed explanation of their cause, however, has been seized upon: In 1973, Duncan Lunan wrote an article in Spaceflight magazine suggesting those studying long delayed echoes had overlooked the possibility they were sent by an alien space probe.

Lunan still has faith in an extraterrestrial explanation for the recordings. "The changes in the long distance echo patterns in apparent response to changes in the outgoing signals from Earth really do look like the responses of a Bracewell probe, and there is still no satisfactory natural explanation for the phenomenon," Lunan said. If the long distance echoes were deliberately produced by a probe, there's a problem in that they stopped in 1975.

"If a probe was monitoring Earth, rather than trying to attract attention, perhaps it belatedly discovered from the 1973 to 1974 publicity that it had given away its presence in the 1920s and pulled out in 1975," Lunan said. "That's the only explanation I can see for its apparent departure."

And yet, for all of that, Lunan said his research has nothing to do with the "Black Knight nonsense." If there is a link between his theory and the Black Knight, it is not one that is being made by him.