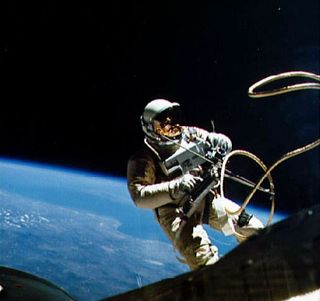 NASA astronaut Ed White called it "the saddest moment of my life" when Mission Control ordered him back inside his Gemini 4 spacecraft after making America's first spacewalk on June 3, 1965.

On April 12, 1961, humanity became a spacefaring species when cosmonaut Yuri Gagarin blasted into orbit on a 108-minute flight high above Earth.

So Gagarin set the original record — first person in space. But over the years, people have notched many other records as our species has extended its toehold in the cold depths of space.

Here's a look at some of these marks, from the oldest person in space to the most consecutive days spent away from terra firma.

Gagarin was the first person to fly in space, and the first American followed only a few weeks later. Alan Shepard blasted off on Freedom 7 on May 5, 1961.

The first female in space was Valentina Tereshkova, a Russian cosmonaut, who flew in space in June 1963. There were several other female cosmonauts selected with her, but none of the others flew. The next woman in space, Svetlana Savitskaya, didn't fly until 1982. The first American woman in space was Sally Ride, who reached space on June 18, 1983 as part of space shuttle mission STS-7.

For almost 20 years, the Americans and the Soviets were the only nations with astronauts. The first nation outside of those two countries to fly an astronaut was the former Czechoslovakia, which saw Vladimir Remek fly on the Soviet Soyuz 28 mission in 1978. Since then, dozens of nations from all over the world have seen their citizens fly in space on American, Soviet or Russian spacecraft.

U.S. Sen. John Glenn, D-Ohio, was 77 when he flew on space shuttle Discovery's STS-95 mission in October 1998. The mission marked Glenn's second spaceflight; he had become the first American to orbit the Earth back in February 1962.

So Glenn holds another record as well: the longest time between trips to space (36 years 8 months).

Cosmonaut Gherman Titov was one month shy of his 26th birthday when he launched into orbit aboard the Soviet spacecraft Vostok 2 in August 1961. He was the second person to orbit the Earth, performing 17 loops around our planet during his 25-hour flight.

Titov was also the first person to sleep in space, and reportedly the first to suffer from "space sickness" (motion sickness in space).

Tereshkova was not only the first woman in space, but also the youngest – her record of 26 years still stands today.

Most consecutive days in space

Russian cosmonaut Valery Polyakov spent nearly 438 consecutive days aboard the Mir space station, from January 1994 to March 1995. He therefore holds the record for longest single human spaceflight — and perhaps set another one for wobbliest legs when he finally touched down.

The most consecutive days in space by an American is 340 days, which happened when Scott Kelly took part in a one-year mission to the International Space Station in 2015-16 (along with Russian cosmonaut Mikhail Kornienko).

The longest single flight by a woman took place in 2016-17, when American astronaut Peggy Whitson spent 288 days aboard the space station. NASA astronaut Christina Koch is scheduled to break that record when she returns from a 328-day mission to the space station in the spring of 2020.

Alan Shepard, on May 5, 1961, became the first American in space. Shepard's suborbital flight in NASA's Freedom 7 vehicle lasted just 15 minutes, carrying him to an altitude of 115 miles (185 km). He splashed down in the Atlantic Ocean just 302 miles (486 km) downrange of his Florida launch site.

Shepard would later get more than this tiny taste of space experience. In 1971, he went to the moon on NASA's Apollo 14 mission. During that flight, the 47-year-old astronaut set another record, becoming the oldest person to walk the surface of another world.

The record for the greatest distance from Earth has stood for more than four decades. In April 1970, the crew of NASA's Apollo 13 mission swung around the far side of the moon at an altitude of 158 miles (254 km), putting them 248,655 miles (400,171 km) away from Earth. It's the farthest our species has ever been from our home planet.

Most total time spent in space

Cosmonaut Gennady Padalka holds this record, with a little more than 878 days accrued over five spaceflights. That's almost two and a half years (2 years 4 months 3 weeks 5 days) spent zipping around the Earth at about 17,500 mph (28,164 kph).

For women, the record is held by NASA astronaut Peggy Whitson, who spent more than 665 days in space. That also happens to be the endurance record for any American astronaut.

This span of time — plus two days, since the first station crew launched Oct. 31, 2000 — also marks the longest period of continuous human presence in space.

The space shuttle Columbia launched on its STS-80 mission on Nov. 19, 1996. It was originally slated to return to Earth that Dec. 5, but bad weather pushed the landing back two days. When Columbia finally came home, it had spent nearly 17 days and 16 hours in space — a record for a shuttle mission. [Most Memorable Space Shuttle Missions]

Most time on the moon

In December 1972, Harrison Schmitt and Eugene Cernan of NASA's Apollo 17 mission spent just under 75 hours — more than three days — poking around on the surface of the moon. They also performed three moonwalks that lasted a total of more than 22 hours.

Perhaps the astronauts lingered because they suspected humanity wouldn't be back for a while — Apollo 17 marked the last time people traveled to the moon, or even went beyond low-Earth orbit.

Incidentally, the first moonwalk took place on July 20, 1969, during Apollo 11, when Neil Armstrong stepped outside of the Eagle lunar module. He was shortly followed by his crewmate Buzz Aldrin. The moonwalk lasted a little over 2 hours, 31 minutes — about the same length of a typical Hollywood movie.

Apollo 10 astronauts Cernan, John Young and Tom Stafford orbited the moon in their command module Charlie Brown and Lunar Module Snoopy. Later, Stafford and Cernan took the Snoopy lunar lander down to within 50,000 feet (15,243 meters) of the moon's surface before returning to dock with the Charlie Brown module.

Most spaceflights by an astronaut

This one is shared by two NASA astronauts. Franklin Chang-Diaz and Jerry Ross both went to space seven times aboard NASA's space shuttles. Chang-Diaz made his flights between 1986 and 2002, while Ross made his between 1985 and 2002.

The first-ever spacewalk was performed by Alexei Leonov, who performed a 12-minute spacewalk during Voshkod 2 on March 18, 1965. The astronaut later said that he had trouble getting back inside the spacecraft (his spacesuit ballooned) and that he also was close to getting heatstroke, but he made it back home safely.

The first untethered spacewalk (one of only a handful performed) happened on Feb. 7, 1984, when Bruce McCandless used the Manned Maneuvering Unit to move away from space shuttle Challenger during mission STS-41-B.

Russian cosmonaut Anatoly Solovyev made 16 spacewalks over the course of five missions in the 1980s and 1990s.

Solovyev spent more than 82 hours outside his spacecraft on those excursions — another record. [The Top 10 Soviet and Russian Science Missions]

U.S. astronaut Michael Lopez-Alegria has an American record of 10 spacewalks, with a total time spent outside of 67 hours 40 minutes. Close behind is the woman to make the most spacewalks; American astronaut Peggy Whitson, performed 10 spacewalks over several missions for a total time of 60 hours 21 minutes.

On March 11, 2001, NASA astronauts Jim Voss and Susan Helms spent 8 hours and 56 minutes outside the space shuttle Discovery and the International Space Station during the STS-102 mission, performing some maintenance work and preparing the orbiting lab for the arrival of another module.

It remains the longest spacewalk in history.

It may sound unlucky, but the record for the largest human gathering in space stands at 13 – which was set during NASA's STS-127 shuttle mission aboard Endeavour in 2009.

In July 2009, Endeavour docked with the International Space Station. The shuttle's seven-person crew then went aboard the orbiting lab, joining the six spaceflyers already there. The 13-person party was the largest-ever gathering of people in space at the same time.

While subsequent NASA shuttle and station crews matched the 13-person record, it has never been topped.

Most women in space at once

This record stands at four women in orbit at the same time.

In April 2010, NASA astronaut Tracy Caldwell Dyson traveled to the International Space Station in a Russian Soyuz spaceship. She was soon joined on the orbiting lab by NASA astronauts Stephanie Wilson and Dorothy Metcalf-Lindenburger and Japan's Naoko Yamazaki, who made the trip aboard the space shuttle Discovery on its STS-131 mission.

Member nations began building the International Space Station — which is about as long as a football field and boasts as much living space as a five-bedroom house — back in 1998. It was completed in 2012, although more expansions are in store.

The cost for the orbiting lab was estimated at $100 billion in 2011. That makes the station the single most expensive structure ever built. The cost will continue to rise due to more modules and time operating the station.

Once again, the International Space Station is the winner.

The orbiting lab is the product of five space agencies representing more than 15 countries. From one end of its backbone-like main truss to the other, it measures about 357.5 feet (109 meters) across. There are huge solar arrays at each end of the truss, and they have a wingspan of 239.4 feet (73 m).

Astronauts live inside a series of connected, pressurized modules that are attached to the main truss. These modules have a habitable space roughly equivalent to the interior cabin of a Boeing 747 jumbo jet. The station is currently staffed by six astronauts, but that population has jumped to between nine and 13 people when a visiting vehicle — like a Russian Soyuz or fully crewed NASA shuttle — was docked.

The space station is so large that it can easily be seen by the unaided eye from the ground if skywatchers have clear skies and know where to look. The station appears as a fast-moving bright light that can outshine the brightest star (Sirius) or Venus, depending on viewing conditions.