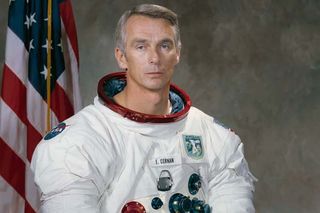 Eugene Cernan, the last Apollo astronaut to walk on the moon, is the focus of the documentary "Last Man on the Moon."
(Image: © NASA)

Eugene Cernan was the last man to walk on the moon. He visited the moon's neighborhood twice, aboard Apollo 10 and Apollo 17, and also did a challenging spacewalk aboard Gemini 9.

While he chose not to fly in the shuttle program, Cernan remained involved in space as a motivational speaker and sometime television commentator who worked on ABC broadcasts about the space shuttle. He died on January 16, 2017.

Apollo Astronaut Eugene Cernan, Last Man to Walk on the Moon, Dies at 82

Remembering Gene Cernan - Singing and Hopeful On The Moon | Video

Eugene Cernan Remembered: Photos of the Last Man to Walk on the Moon

From sea cresting to moon cresting

Cernan started his career as a basic flight trainee in the Navy, racking up hundreds of aircraft carrier landings and thousands of hours in the air on jet aircraft. His experience earned him a spot in NASA's astronaut corps in October 1963.

His first spaceflight was Gemini 9, which had an ambitious agenda. Cernan was tasked to do one of the first American spacewalks, which ended up being immensely difficult as the spacecraft was not designed with enough handholds. Though exhausted, Cernan completed many of his tasks and provided valuable information for future missions.

Cernan next flew into space on Apollo 10 in 1969. In the lunar module Snoopy, he and Tom Stafford skimmed within eight nautical miles on the moon to simulate a lunar landing. All went smoothly until Snoopy was preparing to head back to Charlie Brown.

With Snoopy's guidance system inadvertently pointing the wrong way, the confused spacecraft began spinning above the surface. The startled crew fought to get the spacecraft under control, and succeeded in doing so within seconds. "We've got our marbles," Stafford told Mission Control in relief.

Cernan was eager to walk on the moon on Apollo 17, his next assignment; his previous mission had come so close. This time, he was ready to bring his spacecraft all the way – on pilot's terms, of course.

"There's no way I'm going to go all the way to the moon, particularly for a second time, and let a computer land me on the moon. The arrogance of a pilot, particularly naval aviators, is too great to allow that to happen," Cernan quipped in a 2007 NASA oral interview.

Cernan and Harrison Schmitt touched down safely on the moon to do three spacewalks while on the surface. With 22 hours and 6 minutes outside, Apollo 17 set the mark for longest extravehicular activity done by one mission on the surface of the moon. Meanwhile, Ron Evans, the command module pilot, set a record for most time orbiting the moon.

The mission's greatest discovery came when Schmitt exclaimed that he had found orange regolith, or moon soil. Cernan joked in his autobiography that he feared his crewmate had "overdosed on rocks", but took a look despite his skepticism.

The regolith was indeed orange. It turned out to be tiny bits of colored glass that likely came from a surface vent.

Initials in the dust

Just before going back into the lunar module, Cernan drove the lunar rover roughly a mile away so that the video camera could photograph the takeoff the next day. Next, he knelt and etched his daughter Tracy's initials — T D C — into the dust, according to his autobiography, "The Last Man on the Moon."

Years later, Cernan was looking at a painting done by fellow astronaut Alan Bean. It showed the Apollo 17 crew working near a massive boulder they had encountered during their mission. According to Bean's book, "Painting Apollo," Cernan said he wished he had put his daughter's name on the side of the rock. Bean, therefore, included her name on the rock in the painting, which is called "Tracy's Boulder."

As Cernan prepared to climb up the lunar ladder for the last time, he paused and spoke these words:

"As I take man's last step from the surface, back home for some time to come – but we believe not too long into the future – I'd like to just (say) what I believe history will record. That America's challenge of today has forged man's destiny of tomorrow. And, as we leave the Moon at Taurus–Littrow, we leave as we came and, God willing, as we shall return, with peace and hope for all mankind. Godspeed the crew of Apollo 17."

Cernan recalled that he was tempted to fly on the shuttle, and he probably could have flown a couple of the early missions. But after being to the moon, he was not as inclined to do it. That's why he left the agency in 1976, he said.

"You wouldn't get me up there to do that. Once you've gone to the moon, staying home just isn't good enough."

Cernan left NASA for private business, which included starting the company The Cernan Co. for management and consulting in areas such as aerospace. While he did not fly the shuttle, he did report on it for ABC for a time. He also was chair of the board for Johnson Engineering, a company that specialized in space crew stations.

Speaking in his NASA oral interview, Cernan recalled a speech he had given in 1973 about Apollo 17's legacy. Most of his feelings on that hadn't changed three decades later, he said.

"I said, 'I've been tired of being called the end. Apollo 17 is not the end. It's just the beginning of a whole new era in the history of mankind.' Of course at that time I said, 'We're not only going to go back to the moon, we will be on our way to Mars by the turn of the century.' "