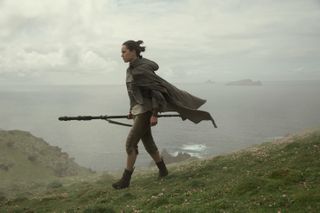 Warning: This post contains spoilers for "Star Wars: The Last Jedi." But you probably knew that, right?

The latest tease of the much anticipated Star Wars sequel is brimming with huge new details. We see more of Rey training with Luke, who seems terrified at just how much his new student's raw Force ability reminds him of Kylo Ren's. Speaking of Kylo, we finally get to see the brooding Dark Side warrior get in on some dogfighting action, which culminates in a fateful, emotional confrontation with his mother: General Leia.

Finn and Captain Phasma have an epic showdown. There's a cute porg moment. We see some creepy new wolf-like creatures. Supreme Leader Snoke appears in the flesh. And it all ends with … Kylo Ren and Rey teaming up? Surely there's more to the clip's big cliffhanger, but we've got plenty to theorize about before The Last Jedi hits theaters on Dec. 15.

"Star Wars: The Last Jedi" will pick up right after the events of 2015 smash hit The Force Awakens, as the First Order plots their revenge against the Resistance while Luke Skywalker makes his long-awaited return to the forefront of the action. Tickets for the new film are already on sale, so be sure to load up your ticketing site of choice and keep that clicking finger ready. May the Force (and good seats) be with you.