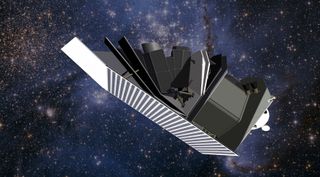 The B612 Foundation is no longer pursuing a large space telescope called Sentinel (above) to look for near Earth asteroids in favor of a concept using smaller spacecraft.
(Image: © B612 Foundation)

WASHINGTON — The B612 Foundation, which once sought to privately develop a large space observatory to search for potentially hazardous near Earth objects (NEOs), is now studying an alternative approach that uses much smaller spacecraft.

The California-based non-profit organization unveiled plans in 2012 for Sentinel, a spacecraft that would go into a Venus-like orbit around the sun, looking back towards Earth orbit to detect NEOs that could post a collision risk to the Earth. The foundation said at the time that it believed Sentinel was the best way to achieve a congressionally-mandated goal of detecting at least 90 percent of potentially hazardous objects at least 140 meters in diameter.

While the B612 Foundation advanced the design of the Sentinel spacecraft, it struggled to raise the estimated $450 million needed to build and launch the spacecraft. NASA terminated an unfunded Space Act Agreement with the foundation in the fall of 2015, citing a lack of progress by the organization on the development of Sentinel.

In a June 19 interview, Ed Lu, the co-founder of B612, said the foundation is focusing instead on smaller, but more numerous, NEOs. "The real gap is the 100 times as many asteroids smaller than 140 meters but still large enough to destroy things on the ground," he said. The lower end of that size range, he said, is roughly 20 to 40 meters in diameter, with an estimated population of several million asteroids.

B612 is studying a technology called "synthetic tracking" to more effectively detect small asteroids. That approach, he said, uses high-speed graphics processing to compensate for the motion of asteroids in long exposures, allowing smaller telescopes to detect these objects.

"We've had quite a bit of success testing this technology already on the ground," he said. "We are looking towards building an Earth orbit demonstrator of the technology."

Ultimately, Lu said he envisions a constellation of likely 5 to 10 satellites, each carrying a telescope with an aperture of 15 centimeters. "They're not cubesats, but they're not much larger," he said.

Lu said the foundation would provide more details about its small satellite plans later this year, including a schedule for flying the first demonstration spacecraft. "The timescale is quite short," he said.

B612 is focusing on smaller asteroids in part because of increasing confidence that other telescopes will be able to find larger NEOs. Those observatories include the Large Synoptic Survey Telescope (LSST), a large, wide-field telescope under construction in Chile, as well as the proposed Near Earth Object Camera (NEOCam) mission.

"LSST and NEOCam have led us to be fairly confident that the asteroid surveys are going to be completed down to the congressional goal" of 140 meters, he said. "It's going to take some number of years, but we're going to get there."

LSST will not enter service until the early 2020s, but Lu said preparations are already underway to make use of its observations. "LSST is going to be an enormous source of data, and its number of discoveries is going to dwarf everything else out there," Lu said.

To help prepare for this, the B612 Foundation announced June 13 the formation of a virtual Asteroid Institute, with Lu serving as its executive director, to support research on asteroid detection and other planetary defense topics. The institute will start by funding two postdoctoral fellows at the University of Washington's Data Intensive Research in Astrophysics and Cosmology (DIRAC) Institute.

"We want them to be working closely with the LSST in particular," he said, noting the role DIRAC will have in analyzing data coming from LSST. "You want to be as close to the source of the data as you can."

The Asteroid Institute is also studying orbital analysis of NEOs, through a project called Asteroid Decision Analysis Machine (ADAM) that can perform calculations of asteroid orbits separate from those done by NASA and the European Space Agency. "You can see how that dovetails with the DIRAC Institute, which is looking at computationally-challenging problems in the science," he said.

The foundation also has relationships with Google to support those analysis efforts, Lu added. "We can bring to bear very large computational resources to address these problems," he said.

Less certain is any role in NEOCam, in part because that mission's future is unclear. NEOCam was a finalist in the latest round of NASA's Discovery program of planetary science missions and, while not selected for development, NASA did decide to fund continued study of the mission concept. "Hopefully we'll also have NEOCam coming on line, but that remains to be seen," Lu said.

At a June 12 meeting of the NASA Small Bodies Assessment Group at the Goddard Space Flight Center, Lindley Johnson, the agency's planetary defense officer, said NASA was looking at various options for carrying out NEOCam's mission. "NEOCam is only one possible way to implement a space-based infrared system, and [the planetary sciences division] is looking into options that can be accommodated within budget limitations, such as a rescoped NEOCam mission," he said.

Such a rescoped mission, Johnson said, would likely focus on detection and characterization of NEOs, and leave out some of the more ambitious science objectives in the proposal submitted for the Discovery competition. "We're working that with them, plus some other ideas about how to streamline both the mission and the management of the mission," he said, calling those discussions with the NEOCam mission team "fruitful" but not yet complete.