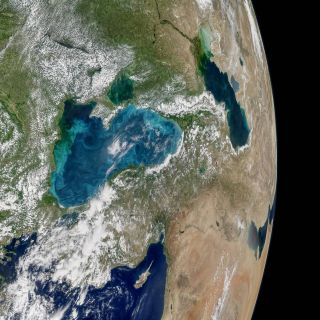 Phytoplankton are tiny organisms that feed on sunlight and dissolved nutrients. The image shows the rivers Danube and Dnieper bringing these nutrients out to the Black Sea, where the phytoplankton feed on them, NASA officials said in a statement. In turn, these small organisms are eaten by larger animals such as fish and shellfish. [Earth from Space: More Amazing Photos]

In the Black Sea in particular, a type of phytoplankton community called coccolithophores are visible from afar because of the white calcium carbonate plates that shield their bodies, the statement said. The white is easily visible from space and appears like milk in the water. Diatoms, on the other hand — another type of phytoplankton found in the Black Sea — can make the water look somewhat darker.

In the statement, NASA said the reflectivity from phytoplankton in the Black Sea appears consistent with that of previous years. If the phytoplankton blooms are too large, this can lead to eutrophication, when oxygen is lost from the water and kills marine life.