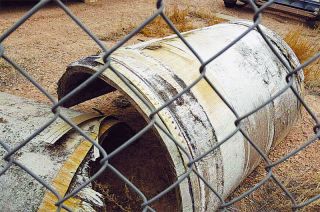 A massive chunk of the United States' first space station is about to land at auction.

Billed as the "largest existing piece of Skylab wreckage in private hands," Regency-Superior Auctioneers of St. Louis is offering the 300-pound (136-kilogram) artifact as part of its online space memorabilia sale scheduled for May 12.

The semi-circular relic has a minimum bid of $30,000 and is estimated to be worth between $45,000 and $55,000 — shipping from Utah not included. [Encountering Skylab: A Visit to the Space Station's Remains]

"Fragment is not terribly attractive (it was, after all, part of a re-entry crash!), but is extremely historically significant," the auctioneers wrote. "A huge hunk of space history!"

Launched on May 14, 1973, the Skylab orbiting workshop used the converted upper stage of a Saturn V moon rocket to host three astronaut crews for NASA's first long-duration missions. The space station was damaged during its liftoff though, which curtailed its full potential use.

NASA hoped to reboost and repair Skylab using the space shuttle, but the winged vehicle's first launch was delayed and the space station fell back to the Earth six years after it was launched on July 11, 1979.

"Much of the debris hit the ocean, but much rained down on Western Australia as well," Regency-Superior wrote in its auction catalog. "The result? Tiny pieces of Skylab were found by many Aussies and they frequently change hands for hundreds of dollars."

The largest fragments of the fallen space station to survive the re-entry and later be found were the oxygen tanks that supported the astronauts on orbit. Two of the outpost's six tanks are exhibited at the Esperance Municipal Museum in Australia and U.S. Space and Rocket Center in Huntsville, Alabama.

A third tank, or at least part of the other two, was found on the land of a privately-held farm, 6 miles (10 km) south of Rwalinna, Western Australia and acquired by a marketing company in the early 1980s.

Delta Vee, Inc. recruited astronaut Charles "Pete" Conrad, who walked on the moon and then commanded Skylab's first crew, to help sell small pieces of the tank, which they attached to trading cards and embedded in paperweights to raise funds to promote on-going space missions such as NASA's Viking 1 Mars lander.

"This piece of Skylab was identified by NASA as part of the covering of one of our oxygen tanks," stated Conrad in a 1982 letter that accompanies the 3-foot by 5-foot (0.9 by 1.5 meter) artifact now headed for auction. Conrad died in a motorcycle accident in 1999.

NASA relinquished its claim on the Skylab parts found in Australia, but inspected and identified the fragments from the oxygen tank, as described in a letter from a member of the agency's Skylab team. [Skylab: The First U.S. Space Station (Photos)]

"It is assumed a form of this verification letter was given to all who had recovered pieces of Skylab and cooperated with NASA, which promised to return all pieces to finders," the auction listing states.

The oxygen tank is among 400 space history artifacts and collectibles Regency-Superior is offering in its latest sale. The auction also features a large collection of autographs, including the signatures of Skylab's nine crew members.