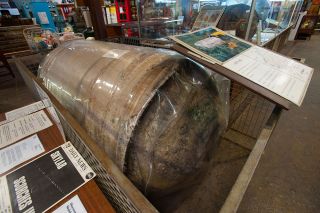 An oxygen tank from the Skylab Space Station, the largest of several pieces that were recovered from America’s first space station following its reentry in 1979, wrapped in protective plastic.
(Image: © Ben Cooper/LaunchPhotography.com)

NASA will celebrate the 40th anniversary of the launch of Skylab, America's first space station, on Tuesday (May 14), but you might be surprised where this icon of U.S. human spaceflight ended up.

After hosting rotating astronaut crews from 1973-1974, the Skylab space station eventually fell back to Earth in pieces that landed in Australia. Now, decades later, many of those pieces are on display at Australian museums, offering a fascinating glimpse into America's first stab at living in space.

From May 1973 to February 1974, Skylabsaw a trio of three-man crews take up residence aboard the outpost, before it was abandoned with the plan of possibly using the space shuttle (then under development) to reactivate the laboratory. But with no way to reboost Skylab to a higher orbit to keep it aloft, and delays in getting the shuttle off the ground , the space station re-entered the Earth’s atmosphere over the southern Indian Ocean in 1979, with pieces landing inland along the south coast of Western Australia. [See more photos of Skylab's remains in Australia]

The mostly uncontrolled re-entry was a media sensation at the time, with newspapers offering prizes for the first debris found and to persons impacted by falling pieces. NASA's attempt at sending Skylab into the Indian Ocean, out of harm's way, proved only somewhat successful, and the spacecraft entered several minutes earlier than predicted, slightly off course.

Several large chunks and dozens of smaller pieces of Skylab survived the fiery plunge through the atmosphere and impacted the ground in the Australian outback over a large swath centered around the community of Balladonia on the Nullarbor Plain. The largest pieces included the oxygen tanks designed to keep the crew alive during their stays.

Visitors can almost miss Skylab. Tucked away in a large display case in a small city museum, the remains of what fell from the sky on July 11, 1979, can be found in Esperance, a port town with less than 10,000 inhabitants located 450 miles from Perth, which is the only major city in the western half of the sparsely populated country. Esperance was directly under the path of Skylab's re-entry. [How NASA's Skylab Space Station Worked (Infographic)]

On the outside, the corrugated metal walls and roof of the museum have the appearance of four long warehouses. That's because the Esperance Municipal Museum, founded in 1976 on the site of a former railroad yard, is composed of converted train equipment sheds.

From the main road along the waterfront in Esperance, a small blue and yellow sign hung on the side of the building is all that denotes it as a "museum," and a larger hanging billboard makes note of the main attraction inside: "In 1979, a spaceship crashed over Esperance. We fined them $400 for littering." A stamp next to it reads, "PAID IN FULL."

It's true. The local government slapped NASA with a comical $400 bill for the cleanup, though the U.S. space agency never officially paid up. However, on the 30th anniversary of the crash in 2009, a radio host for Highway Radio in California and Nevada used his program to raise the funds and put a formal end to the complaint. The paycheck now hangs above the remains.

Around the front of the museum, a large model of the space station sits at a sharp angle atop a pedestal. A plaque on the side describes the space station and what happened along this lonely coastline a few decades ago.

Inside, most of what remains of Skylab can be found in a large Plexiglas-enclosed display case. The largest oxygen tank sits on the floor adjacent to it, wrapped in plastic. Inside the case, the largest intact pieces are displayed at center. These include the space station's storage freezer for food and other items, a water tank, nitrogen spheres for the station’s attitude control system thrusters and a piece of what is identified as a portion of the hatch the astronauts would have crawled through during their visits. Many smaller pieces of debris are laid out around the larger chunks, each labeled and identified where possible.

Several news articles and photographs circle the case, including photos showing the actual re-entry taken by locals and one featured in a National Geographic story from October 1979. The oversized check created by the Nevada radio station, which was used to pay the litter fine, sits proudly above it, and a proclamation from Barstow proclaiming July 13, 2009, as "Shire of Esperance/Skylab Day" lies mounted on a plaque alongside a key to the city.

Portions of the debris were sent elsewhere to be displayed, such as in the United States and Sydney. And it is possible that other pieces of debris remain in the remote outback, still waiting to be found.

If you visit Skylab

If you are visiting Western Australia, the Esperance Municipal Museum is located on James Street, between the waterfront Esplanade and Dempster Street. There is a $4 admission fee. Allow 30 minutes if your goal is to see Skylab only.

Another of the large oxygen tanks that survived Skylab's fall to Earth is on display at the U.S. Space & Rocket Center in Huntsville, Ala. The Powerhouse Museum in Sydney also a portion of a titanium sphere in its collection, but it is not believed to be on display right now.