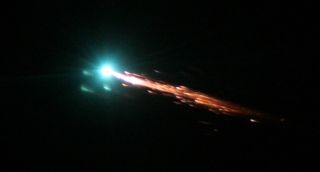 This is one of the first images taken by the DC-8 aircraft which observed the re-entry of Jules Verne ATV over the Pacific Ocean.
(Image: © ESA)

Before the rise of the Space Age in 1957, the only things we had to worry about falling from space were meteors, asteroids and the occasional comet. But today, satellites and spacecraft regularly launch into orbit and beyond, and sometimes the fall back to Earth.

Here's a rundown of the biggest spacecraft to fall from space.

Editor's note: Russia's Mir space station is included here as a reference for comparison (due to its massive size), but it was intentionally deorbited in a controlled manner in 2001.

This countdown was last updated with the Oct. 13, 2019 with details of China's Tiangong space station crashes.

The European Space Agency's GOCE satellite fell to Earth on Nov. 10, 2013 to meet a fiery doom during re-entry.

The gravity-mapping GOCE satellite weighed about 1 ton and was about 17 feet long (5.3 meters). That's pretty big, but much larger satellites have made uncontrolled re-entries over the years.

UARS studied Earth's atmosphere for 14 years, measuring many key chemicals that are still being tracked by other craft today. UARS also provided important information about the amount of light that comes from the sun at ultraviolet and visible wavelengths. The $750 million satellite was decommissioned by NASA in December 2005 and fell to Earth in September 2011.

NASA launched the Skylab space station in 1973, and a total of three manned missions visited the 85-ton space station in 1973 and 1974. NASA originally envisioned Skylab to stay on orbit for a decade or so, but that didn't happen.Higher-than-expected solar activity heated and expanded Earth's atmosphere, increasing the drag on Skylab. By the middle of 1979, it was ready to come down. There wasn't much NASA could do to control the outpost's re-entry, but the space agency was able to manage some of Skylab's tumbling maneuvers.

On July 11, 1979, Skylab returned to Earth, burning up over the Indian Ocean and Western Australia. Some large chunks survived re-entry, making landfall southeast of Perth and elsewhere. Nobody was hurt, but the Australian town of Esperance charged NASA $400 for littering.

NASA, however, never paid up. A California radio DJ took care of the fine in 2009 after collecting donations from his listeners.

NASA launched the 11.6-ton Pegasus 2 satellite in 1965 to study the abundance of micrometeoroids in low-Earth orbit. [Latest news for falling space junk]

Pegasus 2 gathered data and beamed it home for about three years, then zipped around Earth for another 11 years, during which time its orbit got progressively lower and lower. The satellite finally came down on Nov. 3, 1979, but the debris splashed down harmlessly in the mid-Atlantic Ocean.

Salyut 7 was the last of nine space stations the Soviet Union launched under its Salyut program from 1971 to 1982. Salyut 7 blasted off on April 19, 1982, and stayed aloft for nearly nine years, harboring six different resident crews during its operational life. [6 Amazing Space Stations in History]

The unmanned space station came barreling back to Earth on Feb. 7, 1991. At the time, a spaceship called Cosmos 1686 was docked to Salyut 7, to help test the attachment of expansion modules to space stations. Cosmos 1686 was also unmanned, and it tipped the scales at about 22 tons as well.

The huge Salyut 7-Cosmos 1686 complex burned up and broke up over Argentina, with some debris scattering over a town called Capitan Bermudez. There were no reported injuries.

Tragically, NASA's space shuttle Columbia also made an uncontrolled return to Earth at the end of its STS-107 mission in 2003.

On Feb. 1, 2003, Columbia broke apart over Northeastern Texas as it returned home from a 16-day science mission. All seven astronauts aboard were killed, and the 100-ton orbiter was destroyed. [Photos: Remembering the Columbia Space Shuttle Tragedy]

An investigation later cited heat shield damage to the leading edge of Columbia's left wing as the cause of the disaster. A piece of foam insulation from Columbia's external fuel tank broke off during launch and punched a hole in the shuttle's wing 82 seconds after liftoff on Jan. 16, 2003.

The damage allowed super-hot plasma from the spacecraft's atmospheric entry to penetrate Columbia's left wing, destroying the vehicle as it headed to its landing site at NASA's Kennedy Space Center in Florida.

Nobody on the ground was hurt, but the loss of Columbia marked the second fatal disaster of NASA's 30-year shuttle program.

Though this Soviet spy craft was not the biggest unmanned satellite to crash to Earth, it may have been the scariest.

The 8,400-pound (3,800 kg) Cosmos 954 launched in September 1977 on a mission to track the movements of U.S. nuclear submarines. Cosmos 954 itself was nuclear-powered, and its reactor core failed to separate and boost the spacecraft to a higher, nuclear-safe orbit as planned.That made the satellite's out-of-control re-entry, on Jan. 24, 1978, a cause for global concern. Cosmos 954 came back to Earth over Northwestern Canada, spreading radioactive debris over a wide area. The Canadian government billed the Soviet Union $6 million to cover the cost of the search and cleanup efforts; the Soviets eventually paid $3 million. [Space Junk FAQ: Orbital Debris Questions & Answers]

Several other nuclear-powered Soviet satellites have plummeted to Earth, including Cosmos 1402 in 1983.

The 6-ton second stage of China’s Long March 7 rocket fell back to Earth on July 27, 2016, causing a spectacular fireball in skies across the western United States.

The Long March 7 had lifted off on its maiden flight on June 25, toting a prototype crew capsule and various technology demonstrations to orbit, Chinese officials said. China developed the rocket partly to help build a space station, which the nation hopes to have operational by the early 2020s.

On April 1, 2018, China's Tiangong 1 space laboratory fell out of the sky, breaking apart and burning up in the skies over the southern Pacific Ocean at about 8:16 p.m. EDT (0016 April 2 GMT), according to the U.S. Strategic Command's Joint Force Space Component Command.

Tiangong-1 was about 34 feet long by 11 feet wide (10.4 by 3.4 meters), and it weighed more than 9 tons (8 metric tons). The space lab consisted of two main parts: an "experimental module" that housed visiting astronauts and a "resource module" that accommodated Tiangong-1's solar-energy and propulsion systems.

China launched Tiangong 1 into orbit Sept. 29, 2011. It flew about 217 miles (350 kilometers) above Earth and hosted astronaut crews from China's Shenzhou 9 and Shenzhou 10 missions in 2012 and 2013, respectively. After those missions, the primary goals for the lab, which had a two-year-lifespan, were complete.

In March 2016, Chinese flight controllers lost contact with Tiangong 1 and it was allowed to fall from space.

The 8.6-metric-ton Tiangong 2 reentered over the South Pacific Ocean Uninhabited Area, a dumping ground for defunct spacecraft. Tiangong-2 launched in September 2016 and was used by China to test life support, refueling and resupply capabilities to support the development of a larger, 20-ton space station.

In September 2018, the China Manned Space Engineering Office announced the Tiangong 2 space lab would be deorbited in 2019 to end its mission.

One of the largest spacecraft ever to re-enter Earth's atmosphere remains the massive Mir space station, which was deorbited by Russia on March 23, 2001.

Unlike the other falling spacecraft on this list, Mir's re-entry was a completely controlled descent aimed at disposing of the iconic Russian space station in the Pacific Ocean. Because of Mir's immense size, it is included in this list for reference.[Top 10 Soviet & Russian Space Missions]

Russia's Mir space station consisted of several cylindrical modules launched separately and assembled in orbit between 1986 and 1996. By 2001, Mir (whose name meant "Peace" or "Community" in Russian) weighed 135 tons and spent 15 years in space.

Mir was as large as six schoolbuses and, with the exception of two periods without a crew, was continuously inhabited until August 1999.

Mir re-entered the Earth's atmosphere near Nadi, Fiji, and fell into the South Pacific.