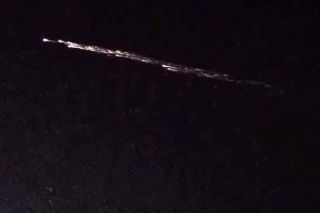 A brilliant fireball created by falling space junk from a Chinese Long March 7 rocket lit up the skies over Utah, Nevada, Colorado, Idaho and California late Thursday, July 27, 2016. This still image is from a video captured by observer Matt Holt in Utah, who posted his account on Twitter and YouTube.
(Image: © Matt Holt @mholt6)

The dazzling fireball, which you can see in this awesome video by observer Matt Holt, lit up skies over Utah, Nevada, Colorado, Idaho and California about 9:40 p.m. local time Wednesday (12:40 a.m. EDT and 0440 GMT today, July 28), breaking into many bright pieces as it went.

The sky show occurred around the peak of the annual Delta Aquarid meteor shower, but it wasn't caused by bits of comet dust. Rather, experts say, the culprit Wednesday night was the second stage of China's Long March 7 rocket, which launched on its maiden flight June 25. [Biggest Spacecraft to Fall Uncontrolled From Space]

"So far in 2016 there have been 25 re-entries of objects massing 1 ton or more. But objects of 5 ton+ class like this are rare," McDowell said last night via his Twitter account, @planet4589.

"Only bigger re-entry so far this year was a Russian Zenit rocket stage that came down over Vietnam on New Year's Day," he said in another tweet.

China developed the Long March 7 in part to help build the space station it wants to have up and running by the early 2020s. On June 25 — the rocket's first flight — the Long March 7 lofted a prototype crew capsule and a variety of technology demonstrations, Chinese officials have said.

And then came the spectacular fall.