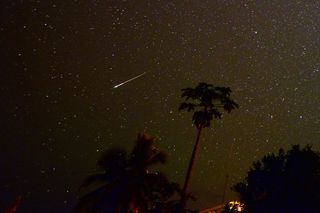 The annual Delta Aquarid meteor shower peaks overnight tonight (July 28), and you can watch the event live via a special webcast by the online Slooh Community Observatory.

Viewers can check out shots of the Delta Aquarids taken by telescopes in the United States, the United Kingdom, Canada and Japan operated by Slooh and several partner organizations. The main show starts at 8 p.m. EDT today (0000 GMT Friday), though an early broadcast is also available today at 8 a.m. EDT (1200 GMT) from Japan. The shows can be viewed live on the Slooh website. Viewers can send questions to @Slooh on Twitter, or chat live with the team on Slooh.com. The webcast will also be available here on Space.com, courtesy of Slooh.

"This annual meteor shower is best for observers in the Southern Hemisphere and more southerly regions of the Northern Hemisphere, but no matter where you are, you can watch the shower on Slooh," the observatory's representatives wrote in a press release. [How to See the Best Summer Meteor Showers of 2016]

Meteor showers occur when Earth plows into a stream of debris left behind by a comet or an active asteroid. But exactly which comet or asteroid causes the Delta Aquarids remains a mystery, Slooh representatives said. The suspected culprit is Comet 96/P Machholz, which was discovered in 1986 by Slooh member Don Machholz. The meteor shower, however, has been known since at least the 1870s.

Today's broadcast will be hosted by Paul Cox and Slooh astronomers Bob Berman and Eric Edelman, Slooh said. They will cover various topics, including the cause of meteor showers and folklore about the constellation Aquarius (the direction from which the meteor shower appears to radiate in the night sky.)