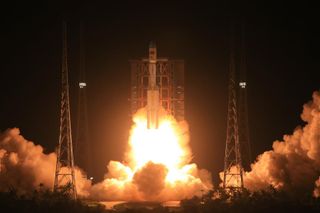 The Long March 7 rocket — which China developed in part to help build and service a crewed space station that the nation plans to have up and running by the early 2020s — blasted off on its maiden flight from Wenchang Satellite Launch Center at 8 a.m. EDT Saturday (1200 GMT; 8 p.m. local time), Chinese officials said.

The uncrewed liftoff aimed to test both the new rocket and the launch facility, which is located on the island of Hainan, off China's southern coast. But there were other objectives as well; the Long March 7 also carried a scaled-down version of a future crew capsule, a satellite-deploying upper stage, and technology demonstrations in space-junk cleanup, satellite refueling and other fields, Chinese officials have said.

The prototype capsule made a parachute-aided touchdown and was successfully recovered in north China's Inner Mongolia Autonomous Region on Sunday (June 26), according to Chinese media reports.

"It is capable of sending 13.5 tons of payloads to low Earth orbit. Using new equipment such as the LOX/Kerosene engine, Long March 7 is a pollution-free launch vehicle and will boost China's space capabilities," CMSE officials wrote in an update after Saturday's launch.

The Long March 7 fired its engines for a little over 10 minutes on its maiden flight, entering an elliptical orbit that gets as close as 124 miles (200 kilometers) to Earth, and as far away as 245 miles (394 km), CMSE officials added. (For comparison, the International Space Station circles the planet at an average altitude of about 250 miles, or 400 km.)

The Long March 7 should end up playing a large role in the construction of a 60-ton space station that China wants to be operational by 2022, Chinese officials have said.

"The first mission of Long March 7 achieved the planned goal and opened a new chapter in China's space lab project. Its success laid a solid foundation for the project's upcoming missions," CMSE officials wrote in the update.