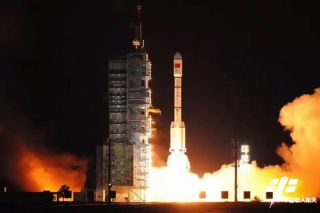 China has launched its second-ever space lab, a key part of the nation's plan to have a permanently staffed space station up and running by the early 2020s.

If all goes according to plan, the 9.5-ton (8.6 metric tons) Tiangong-2 — whose name translates as "Heavenly Palace" in Mandarin — will soon settle into an orbit about 236 miles (380 kilometers) above Earth and perform a series of initial tests and checkouts, according to China's state-run Xinhua news agency. [China's Tiangong-2 Space Lab Mission in Pictures]

The space lab will then climb to an altitude of 244 miles (393 km) — the same height at which China's future space station will operate — and await a mid- to late-October visit from two Chinese astronauts aboard a vessel called Shenzhou-11.

Those astronauts, who have not yet been publicly identified, will stay aboard Tiangong-2 for 30 days, conducting a series of experiments in biology, physics and space medicine, Xinhua reported.

In April 2017, China's first cargo ship, Tianzhou-1, will dock with Tiangong-2, delivering fuel and other supplies to the space lab.

The 34-foot-long (10.4 meters) Tiangong-2 looks a lot like China's first space lab, Tiangong-1, which launched in September 2011. Chinese astronauts visited Tiangong-1 on two different occasions, spending about eight and 12 days aboard the lab in June 2012 and June 2013, respectively.

Tiangong-1 ended its operational life in March of this year and will likely fall back to Earth in the second half of 2017, Chinese officials have said.

"The launch of Tiangong-2 will lay a solid foundation for the building and operation of a permanent space station in the future," Wu Ping, deputy director of China's manned space engineering office, said during a prelaunch briefing Wednesday (Sept. 14), Xinhua reported.

China's human spaceflight program has now entered a "new phase of application and development," she added.

China aims to build a 60-ton (54 metric tons) space station by 2022 or thereabouts, officials have said. For comparison, the International Space Station (ISS), which has hosted rotating astronaut crews continuously since November 2000, weighs about 440 tons (400 metric tons). (China is not part of the international consortium that operates the ISS.)