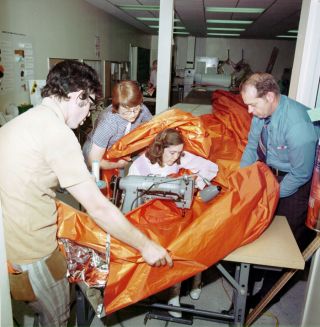 A sail-like sunshade for the Skylab Orbital Workshop is being fabricated in preparation to repair the lost shield for the 1973 launch of Skylab.
(Image: © NASA.)

In this historical photo from the U.S. space agency, a sail-like sunshade for possible use as a sunscreen for the Skylab Orbital Workshop (OWS) is shown being fabricated in the GE Building across the street from Johnson Space Center, Houston Texas. Three people help the seamstress feed the material through the sewing machine. The three-layered sunshade will be composed of a top layer of aluminized mylar, a middle layer of laminated nylon ripstop, and a bottom layer of thin nylon.

The work shown here is part of the crash program underway to prepare a sunshield for Skylab to replace the orginal shield which was lost when Skylab 1 was launched on May 14, 1973. The improvised solar shield selected to be used will be carried to Earth orbit by the Skylab 2 crewman who will then deploy the reflective parasol to shade part of the OWS from the hot rays of the sun. Loss of the orginal sun shield has caused an overheating problem in the Orbital Work Shop.