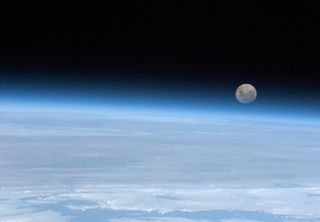 Astronaut Chris Hadfield snapped this photo of a full moon on Jan. 30 from the International Space Station. "Full Moon rising. So near, and yet..." he wrote.
(Image: © Chris Hadfield/@ Cmdr_Hadfield)

The moon has intrigued humanity since we first craned our necks toward the heavens, but many people still have questions about why Earth's nearest neighbor appears as it does in the sky.

The moon's ceaseless celestial dance is indeed a complex one, taking it from dark and "new" to bright and full, then back again, over and over.

Here are answers to a few interesting questions that frequently come up regarding the phases of the moon:

How long does a full moon last?

Probably not as long as you think.

The actual moment of full moon — that time when the moon is opposite to the sun in the sky — can be found in any almanac, and in many newspapers (such as The New York Times). [Amazing 'Supermoon' Photos by Stargazers]

We can therefore say that the moon is officially "full" for only one minute! The full moon of March 27, for instance, occurs at 5:27 a.m. EDT (0927 GMT). In the very strictest sense, one minute before that time, the phase of the moon is a waxing gibbous; one minute after that time, it's a waning gibbous phase.

But is a full moon really "full?"

Surprisingly, the answer is "no." The disk of the moon can only appear 100 percent sunlit from Earth when it is diametrically opposite to the sun in the sky. But that's impossible, because at that moment the moon would be positioned in the middle of the Earth's shadow and in total eclipse!

In fact, in any month where there is no eclipse, there should be an ever-so-slight sliver of darkness visible somewhere on the lunar limb throughout those hours when the moon is passing through "full" phase.

Interestingly, people often refer to a "full" moon one, two or even three days before and/or after the actual full moon date. Yet close inspection will usually reveal that the moon is not fully illuminated at these times but is indeed gibbous, or slightly out of roundness.

Why is the half moon called a "quarter moon?"

The term "quarter moon" sounds a bit incongruous to be sure. But the "quarter" in question does not refer to the amount of the moon’s disk that is illuminated by the sun, but rather to how far along the moon has progressed through its cycle of phases. [Top 10 Cool Moon Facts]

The cycle always begins at new moon. The amount of time that it takes to go from one new moon to the next — or the time it takes the moon to circle Earth once, using the sun as the reference point — is 29.53 days on average. This is called a “synodic” month, derived from the word synod, meaning “meeting" (for at new moon, the moon “meets” the sun).

If we were to divide that average period of 29.53 days into quarters, it would take 7.38 days to go from one quarter to the next.

So, using the new moon as the starting point, it would take 7.38 days to complete one quarter of the synodic cycle — the first quarter. At that point, the moon appears to shine roughly half by day and half by night. It rises about six hours later than the sun (one-quarter of a day), at around noon, and climbs the sky during the afternoon about half a sky (90 degrees, or one-quarter of a full circle) away from the sun. The moon reaches its highest point in the sky around sunset and shines for the first half of the night.

After another 7.38 days (or 14.76 days from new moon), the moon has gone through half a synodic month. Now the moon is opposite to the sun in the sky, with its entire disk illuminated. We could call this the "second quarter" moon, but we've opted for “full moon” instead.

Another 7.38 days after full moon (or 22.14 days from new moon) the moon appears half-illuminated once again, but now it precedes the arrival of the sun by about six hours, rising around midnight and setting around noon.

Some refer to this as the "third quarter" moon, which it indeed is. Most, however, call this the "last quarter," which, strictly speaking, it isn't.  The term “last quarter” should really be reserved for when the moon has completed the final quarter of its synodic cycle.  But since this moment also coincides with the beginning of a new synodic month (the next new moon), we have come to associate the moon’s third quarter with last quarter.

Sometimes I receive emails asking this question: "My newspaper says full moon will occur on the 8th but my calendar says that full moon falls on the 9th. Why is this so?"

Just about all calendar manufacturers and newspapers base the dates of the lunar phases on the calculations of the U.S. Naval Observatory. Accurate moon phase data is, in fact, available from the Naval Observatory's Astronomical Applications Department here, which covers the years 1700 to 2035.

There is one thing, however, that some manufacturers and newspapers overlook. All the dates and times provided by the Naval Observatory are given in Universal Time (UT), which is sometimes referred to, now colloquially, as Greenwich Mean Time (GMT).

UT and GMT are often used loosely to refer to time kept on the Greenwich meridian (longitude zero). As a result, if the times are not converted to your local time zone, you can sometimes end up being one day off on the date of a particular phase.

A good example of this will come up in August 2013. The Naval Observatory says full moon will occur that month on Aug. 21 at 0145 UT. But for those of us in North America, the moon will actually reach its full phase on Aug. 20 — in the case of Boston, for example, at 9:45 p.m. local time, since UT runs four hours ahead of Eastern Daylight Time.