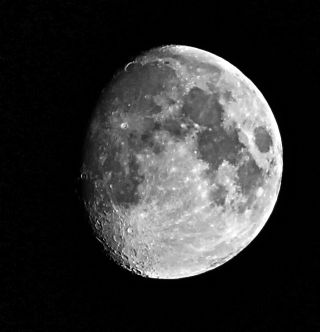 Night sky observer Thomas Cooper snapped this amazing view of the moon and its craters on Aug. 27, 2012.
(Image: © Thomas Cooper)

The moon is Earth's nearest cosmic neighbor, but it is more than just a big pretty light in the sky.

Here are 10 cool, and sometimes surprising, facts about Earth's nearest neighbor: the moon.

FIRST STOP: How the Moon was Made

Making of the Moon

The moon was created when a rock the size of Mars slammed into Earth, shortly after the solar system began forming about 4.5 billion years ago, according to the leading theory.

NEXT: Locked in Orbit

Perhaps the coolest thing about the moon is that it always shows us the same face. Since both the Earth and moon are rotating and orbiting, how can this be?

Long ago, the Earth's gravitational effects slowed the moon's rotation about its axis. Once the moon's rotation slowed enough to match its orbital period (the time it takes the moon to go around Earth) the effect stabilized. Many of the moons around other planets behave similarly.

What about phases? Here's how they work: As the moon orbits Earth, it spends part of its time between us and the Sun, and the lighted half faces away from us. This is called a new moon. (So there's no such thing as a "dark side of the moon," just a side that we never see.)

As the moon swings around on its orbit, a thin sliver of reflected sunlight is seen on Earth as a crescent moon. Once the Moon is opposite the Sun, it becomes fully lit from our view — a full moon.

More than 400 trees on Earth came from the moon. Well, okay: They came from lunar orbit. Okay, the truth: In 1971, Apollo 14 astronaut Stuart Roosa took a bunch of seeds with him and, while Alan Shepard and Edgar Mitchell were busy sauntering around on the surface, Roosa guarded his seeds.

Later, the seeds were germinated on Earth, planted at various sites around the country, and came to be called the moon trees. Most of them are doing just fine.

NEXT: More Than One Moon?

The moon is Earth's only natural satellite. Right? Maybe not. In 1999, scientists found that a 3-mile- (5-kilometer-) wide asteroid may be caught in Earth's gravitational grip, thereby becoming a satellite of our planet.

Cruithne, as it is called, takes 770 years to complete a horseshoe-shaped orbit around Earth, the scientists say, and it will remain in a suspended state around Earth for at least 5,000 years.

NEXT: A Cosmic Punching Bag

The moon's heavily cratered surface is the result of intense pummeling by space rocks between 4.1 billion and 3.8 billion years ago.

The scars of this war, seen as craters, have not eroded much for two main reasons: The moon is not geologically very active, so earthquakes, volcanoes and mountain-building don't destroy the landscape as they do on Earth; and with virtually no atmosphere there is no wind or rain, so very little surface erosion occurs.

NEXT: The Moon is an Egghead

The moon is not round (or spherical). Instead, it's shaped like an egg. If you go outside and look up, one of the small ends is pointing right at you. And the moon's center of mass is not at the geometric center of the satellite; it's about 1.2 miles (2 kilometers) off-center.

NEXT: The Moon Shakes

Apollo astronauts used seismometers during their visits to the moon and discovered that the gray orb isn't a totally dead place, geologically speaking. Small moonquakes, originating several miles (kilometers) below the surface, are thought to be caused by the gravitational pull of Earth. Sometimes tiny fractures appear at the surface, and gas escapes.

Scientists say they think the moon probably has a core that is hot and perhaps partially molten, as is Earth's core. But data from NASA's Lunar Prospector spacecraft showed in 1999 that the moon's core is small — probably between 2 percent and 4 percent of its mass. This is tiny compared with Earth, in which the iron core makes up about 30 percent of the planet's mass.

NEXT: Is the Moon a Planet?

The Moon Is a Planet?

Our moon is bigger than Pluto. And at roughly one-fourth the diameter of Earth, some scientists think the moon is more like a planet. They refer to the Earth-moon system as a "double planet." Pluto and its moon Charon are also called a double-planet system by some.

NEXT: Origin of Earth's Tides

Tides on Earth are caused mostly by the moon (the Sun has a smaller effect). Here's how it works:

The moon's gravity pulls on Earth's oceans. High tide aligns with the Moon as Earth spins underneath. Another high tide occurs on the opposite side of the planet because gravity pulls Earth toward the moon more than it pulls the water.

At full moon and new moon, the Sun, Earth and moon are lined up, producing the higher than normal tides (called spring tides, for the way they spring up). When the moon is at first or last quarter, smallerneap tides form. The Moon's 29.5-day orbit around Earth is not quite circular. When the moon is closest to Earth (called its perigee), spring tides are even higher, and they're called perigean spring tides.

All this tugging has another interesting effect: Some of Earth's rotational energy is stolen by the moon, causing our planet to slow down by about 1.5 milliseconds every century.

NEXT: One Day, the Moon Will Leave

As you read this, the moon is moving away from us. Each year, the moon steals some of Earth's rotational energy, and uses it to propel itself about 3.8 centimeters higher in its orbit. Researchers say that when it formed, the moon was about 14,000 miles (22,530 kilometers) from Earth. It's now an average of 239,000 miles, or 385,000 kilometers away.