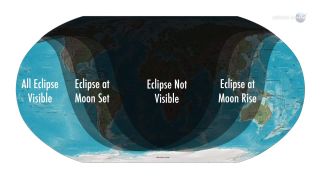 This map shows areas of visibility around the world for the partial lunar eclipse on June 4, 2012.
(Image: © NASA)

The historic transit of Venus across the sun Tuesday is a must-see for skywatchers, but observers shouldn't overlook another celestial event that comes just one day earlier — a partial lunar eclipse of the June full moon.

On Tuesday (June 5), Venus will trek across the sun's face from Earth's perspective, marking the last such transit of Venus until 2117. In a sort of celestial warmup, the full moon will dive through the Earth's shadow on Monday morning to produce a partial lunar eclipse that will be visible to observers throughout parts of North America, Asia and the Pacific region, weather permitting.

The lunar eclipse comes two weeks after the May 20 annular solar eclipse that enthralled skywatchers around the world, and that's no accident.

Solar eclipses are always accompanied by lunar eclipses, either two weeks before or two weeks after. The moon travels halfway in its orbit around the Earth in that time, forming another straight line with our planet and the sun. (In solar eclipses, the moon blots out the sun, while lunar eclipses occur when Earth's shadow covers all or part of the moon.)

The same parts of the world that were treated to the May 20 "ring of fire" solar eclipse will thus be favorably placed for Monday's partial lunar eclipse. Much of central and western North America should get a good show, as should eastern Asia, Australia and the Pacific region. The full moon of June is konwn as the Strawberry Moon since it occurs during the short strawberry-harvesting season this month. [Partial Lunar Eclipse of June 4, 2012: Observer's Guide (Images)]

The eclipse begins in earnest at 6 a.m. EDT (1000 GMT), when the moon first contacts the umbra, the dark inner portion of Earth's shadow. The umbra might appear dark and relatively colorless to the naked eye, but binoculars or a telescope may show it glowing dimly orange, red or brown.

Observers in Europe will miss out on Monday's lunar eclipse, as will part of the United States East Coast, where the moon will set before it enters the dark umbra. Most viewers in the Pacific Time Zone, however, should be able to see a considerable portion of the two-hour eclipse.

Places on the other side of the International Date Line — such as Australia, New Zealand and Asia — will see the eclipse on Monday evening rather than Monday morning.

Editor's note: If you snap a great photo of the partial lunar eclipse and would like to share it with SPACE.com for a story or gallery, please send images and comments to SPACE.com managing editor Tariq Malik at tmalik@space.com.