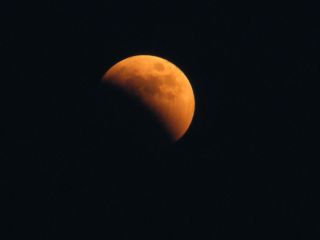 Throughout history, eclipses have inspired awe and even fear, especially when total lunar eclipses turned the moon blood-red, an effect that terrified people who had no understanding of what causes an eclipse and therefore blamed the events on this god or that. Below, you'll find the science and history of lunar eclipses, learn how they work, and see a list of the next ones on tap. [See also our guide to Solar Eclipses.]

When is the next lunar eclipse?

The moon will again take on a slight saturation during the penumbral lunar eclipse of June, 5 2020. The coloring will occur across half of the lunar face. Central and western Africa, southeast Asia and most of Australia will view the entire penumbral lunar eclipse, which begins at 1:45 p.m. EDT (1745 GMT), peaks at 3:25 EDT (1925 GMT) and ends at 5:04 p.m. EDT (2104 GMT).

NASA keeps a list predicting lunar eclipses until 2100. They also keep data about past lunar eclipses. During the 21st century, Earth will experience a total of 228 lunar eclipses, according to the space agency.

What is a lunar eclipse?

Because the moon's orbit around Earth lies in a slightly different plane than Earth's orbit around the sun, perfect alignment for an eclipse doesn't occur at every full moon. A total lunar eclipse develops over time, typically a couple hours for the whole event. Here's how it works: Earth casts two shadows that fall on the moon during a lunar eclipse: The umbra is a full, dark shadow. The penumbra is a partial outer shadow. The moon passes through these shadows in stages. The initial and final stages — when the moon is in the penumbral shadow — are not so noticeable, so the best part of an eclipse is during the middle of the event, when the moon is in the umbral shadow.

Total eclipses are a freak of cosmic happenstance. Ever since the moon formed, about 4.5 billion years ago, it has been inching away from our planet (by about 1.6 inches, or 4 centimeters per year). The setup right now is perfect: the moon is at the perfect distance for Earth's shadow to cover the moon totally, but just barely. Billions of years from now, that won't be the case.

According to NASA, two to four solar eclipses occur each year, while lunar eclipses are less frequent. "In any one calendar year, the maximum number of eclipses is four solar and three lunar," the agency said. However, while solar eclipses can only be seen along a roughly 50-mile wide path, each lunar eclipse is visible from over half the Earth.

Total lunar eclipse: Earth's full (umbral) shadow falls on the moon. The moon won't completely disappear, but it will be cast in an eerie darkness that makes it easy to miss if you were not looking for the eclipse. Some sunlight passing through Earth's atmosphere is scattered and refracted, or bent, and refocused on the moon, giving it a dim glow even during totality. If you were standing on the moon, looking back at the sun, you'd see the black disk of Earth blocking the entire sun, but you'd also see a ring of reflected light glowing around the edges of Earth — that's the light that falls on the moon during a total lunar eclipse.

Partial lunar eclipse: Some eclipses are only partial. But even a total lunar eclipse goes through a partial phase on either side of totality. During the partial phase, the sun, Earth and moon are not quite perfectly aligned, and Earth's shadow appears to take a bite out of the moon.

"What people see from Earth during a partial lunar eclipse depends on how the sun, Earth and moon are lined up," according to NASA.

Penumbral lunar eclipse: This is the least interesting type of eclipse, because the moon is in Earth's faint outer (penumbral) shadow. Unless you're a seasoned skywatcher, you likely won't notice the effect, in which the moon is subtly shaded by Earth's shadow.

"The outer part of Earth's penumbra is so pale that you won't notice anything until the moon's edge has slid at least halfway in," Alan MacRobert, a senior editor at Sky & Telescope magazine, said in a statement.

The moon may turn red or coppery colored during the total portion of an eclipse. The red moon is possible because while the moon is in total shadow, some light from the sun passes through Earth's atmosphere and is bent toward the moon. While other colors in the spectrum are blocked and scattered by Earth's atmosphere, red light tends to make it through easier. The effect is to cast all the planet's sunrises and sunsets on the moon.

"The exact color that the moon appears depends on the amount of dust and clouds in the atmosphere," according to NASA scientists. "If there are extra particles in the atmosphere, from say a recent volcanic eruption, the moon will appear a darker shade of red."

Christopher Columbus leveraged a blood-red eclipse in 1504 to frighten natives on Jamaica into feeding him and his crew. It was on Columbus' fourth and final voyage to the New World. An epidemic of shipworms ate holes in the ships of his fleet; Columbus' was forced to abandon two ships. He then beached his last two on Jamaica on June 25, 1503. The natives welcomed the castaways and fed them. But after six months, Columbus' crew mutinied, and robbed and murdered some of the Jamaicans, who had grown weary of feeding the crew.

Columbus had an almanac that foretold a lunar eclipse on Feb. 29, 1504. He met the local chief, and told him the Christian god was angry with his people for no longer supplying food. Columbus said to expect a sign of God's displeasure three nights later, when he would make the full moon appear "inflamed with wrath." When the blood-red moon came to pass, the natives were terrified and "with great howling and lamentation came running from every direction to the ships laden with provisions," according to an account by Columbus' son.

Just before the total phase of the eclipse was about to end, Columbus said God had pardoned the natives and would bring the moon back. The crew was well fed until help arrived in November and Columbus and his men sailed back to Spain.

How to watch a lunar eclipse

Lunar eclipses are among the easiest skywatching events to observe. Simply go out, look up and enjoy. You don't need a telescope or any other special equipment. However, binoculars or a small telescope will bring out details in the lunar surface — moonwatching is as interesting during an eclipse as anytime. If the eclipse occurs during winter, bundle up if you plan to be out for the duration — an eclipse can take a couple hours to unfold. Bring warm drinks and blankets or chairs for comfort.

If you want to photograph the next lunar eclipse, be sure to check out our guide by veteran astrophotographers Imelda Joson and Edwin Aguirre.

"We can get really good science out of what happens to the surface of the moon during total lunar eclipses but again, the cool thing is that the moon changes color," Noah Petro, a research scientist at the Goddard Space Flight Center in Maryland, told Space.com. "It's something fun to see — it's benign, but it's a change. And anytime we see change in the skies it's always kind of exciting."