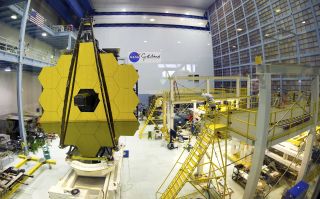 NASA's Goddard Space Flight Center (GSFC) is the nation's largest organization of space scientists and engineers, according to the agency's website. With a main campus just northeast of Washington, D.C., in Greenbelt, Maryland, GSFC has managed or played key roles in hundreds of NASA missions, including the Hubble Space Telescope, Lunar Reconnaissance Orbiter, Landsat satellites, the Parker Solar Probe and the Tracking and Data Relay Satellite (TDRS) network.

GSFC also manages several installations in other locations, including:

A new research center for the space age

GSFC was founded shortly after NASA itself, in late 1958. As Alfred Rosenthal explained in his 1968 publication "Venture Into Space: Early Years of Goddard Space Flight Center" (NASA, 1968), GSFC provided an institutional base for experts from military projects, such as the Navy's Vanguard satellite program and the Army's work on space communication, who were being transferred to the new civilian space agency. The Center was also assigned a long list of other duties, including theoretical research, development of instruments to fly in space, interpretation of scientific results from flight programs and administration of contracts.

In contrast to some other NASA centers, such as Glenn and Langley, which were based on established aeronautical facilities, Goddard was created specifically to work on space research.

Construction of the new center began in 1959 on land formerly owned by the U.S. Department of Agriculture. In March 1961, the center was formally dedicated and named in honor of American rocket pioneer Robert H. Goddard, 35 years after he launched the first successful liquid-fueled rocket in Auburn, Massachusetts.

Today, according to the Center's website, the main Goddard campus comprises more than 34 buildings on a campus occupying 1,270 acres. All the Goddard installations, combined, employ more than 10,000 people, the Center stated in its 2018 annual report.

Teams at Goddard managed the 1960 launch of the very first communications satellite — a huge mylar balloon called Echo that reflected radio transmissions back to Earth, as well as the first international space satellites: Ariel, in collaboration with the United Kingdom, and Alouette I, with Canada, both in 1962. Ariel and Alouette pioneered a "no exchange of funds" type of partnership, in which the partners contribute services and equipment to a project, but none of the partners pays any of the others with money. This arrangement is used to this day in projects such as the International Space Station.

Goddard engineers organized the creation of the Delta rocket as a vehicle to launch small to medium-size payloads into Earth orbit, and used it for many of Goddard's early launches. Among many later variations on the design, the Delta II became an "industry workhorse," with 155 launches from 1989 to 2018, according to Boeing.

The key to it all: communication

A satellite in low Earth orbit spends only a few minutes within range of any one tracking station, so many stations are needed to keep in touch with a craft throughout one orbit. As NASA historian Lane Wallace explains in her book "Dreams, Hopes, Realties," (NASA, 1999), over the decades, Goddard has organized a series of worldwide networks of antennas on Earth to communicate with spacecraft in orbit, setting an example of international cooperation on technical projects.

Goddard's Minitrack network, created for the very first satellites starting in the 1950s, led to the Mercury Space Flight Network of the 1960s, with seven ground stations and two ships at sea communicating with solo astronauts in Mercury capsules. Communication between ground stations depended on telephone lines, which could fail. So, during Project Gemini, which sent two-man crews into orbit in the mid-1960s, Goddard maintained a backup mission-control center that could take over from Houston if necessary.

To handle the big data downloads from the first robotic space observatories, Goddard set up a new Satellite Tracking and Data Acquisition Network (STADAN), with antenna dishes up to 85 feet (25 meters) wide in 21 locations around the world. Goddard's Applications Technology satellites (ATS) demonstrated the concept of using satellites in orbit to relay messages between spacecraft and Earth stations. ATS led to TDRSS, the Tracking and Data Relay Satellite System, which now includes 10 satellites in geosynchronous orbits providing near-continuous communication with the International Space Station, the Hubble Space Telescope and other spacecraft.

Goddard also manages the Near Earth Network of more than 15 worldwide commercially operated ground stations for communication with orbiting spacecraft, and the NASA Communications Network (NASCOM), which sends data between control centers. According to its 2018 annual report, Goddard is working on space communications using laser light, which can transmit more data per second than radio waves.

Earth and space in depth

Starting in the 1970s, Goddard's work grew to include deeper views into space and closer examination of Earth using robotic spacecraft.

Orbiting solar observatories watched the sun in ultraviolet, X-ray and gamma-ray light that can't be seen from observatories on the ground because those wavelengths are blocked by Earth's atmosphere. The Solar Max satellite observed solar flares and was also repaired by space shuttle astronauts in 1984, paving the way for future on-orbit servicing of the Hubble Space Telescope.

The Uhuru satellite, developed at Goddard, launched in 1970 and discovered Cygnus X-1, the first observed object thought to contain a black hole. Uhuru’s project manager at Goddard, Marjorie Townsend, was the first woman to manage a NASA satellite project.

Other Goddard satellites sensitive to X-rays and gamma-rays established the link between galaxies and mysterious powerful sources of light called quasars. The satellites also analyzed the gas in clusters of galaxies, found new pulsars and discovered gamma-ray bursts.

Another of Goddard's accomplishments was the International Ultraviolet Explorer satellite, which launched in 1978 and featured a new type of stabilizing gyroscope that was later used on the Hubble Space Telescope. The satellite also demonstrated a new "transparent" software system, allowing guest astronomers to use the telescope.

The Cosmic Background Explorer (COBE) satellite, launched in 1989, made the first precise measurement of the cosmic microwave background, also known as the afterglow  from the Big Bang. GSFC scientist John Mather shared the 2006 Nobel Prize in Physics for the project.

Early weather satellites flew in relatively low Earth orbits, able to photograph a particular geographical region only when they passed over it. In 1975, GSFC developed the first Geostationary Operational Environmental Satellite (GOES), which flew in a high orbit that kept it almost stationary above the longitude of North America. The GOES series has progressed through several generations of improvements, leading to the GOES-16 and GOES-17 satellites monitoring the Western Hemisphere today. The GOES satellites, once built and launched, are turned over to the National Oceanic and Atmospheric Administration (NOAA) for daily operation.

An early Goddard geosynchronous satellite, ATS-3, took the first space-based color photograph of an entire hemisphere of Earth in 1967. And an instrument on Goddard's Nimbus 7 confirmed the existence of an ozone "hole" over Antarctica in 1985.

Recent past, present and future

Goddard's main campus has a number of specialized test and manufacturing facilities, including:

Goddard has a hand in more than 50 current space flight projects. Among them, the Hubble Space Telescope and the Lunar Reconnaissance Orbiter both have their mission control centers on the GSFC campus. Two currently operating Mars probes, Curiosity and MAVEN, carry Goddard-developed science instruments. The Transiting Exoplanet Survey Satellite (TESS), which has been searching for planets around other stars since 2018, is under Goddard management.

Goddard missions being prepared for launch include Landsat 9, the latest in a series of Earth-monitoring satellites going back to 1972; the James Webb Space Telescope (in collaboration with the European and Canadian space agencies); Lucy, a mission to explore the Trojan asteroids that accompany Jupiter; and WFIRST (Wide Field Infrared Survey Telescope), which should image large areas of the sky 1,000 times faster than Hubble.

If you've seen a particularly beautiful animation of how a solar eclipse works or what makes the moon's phases, it may well have come from Goddard's Scientific Visualization Studio, which produces still images and animations based on data collected by NASA missions.

Relatively small rockets, called sounding rockets, fly up to altitudes from 62 to 870 miles (100 to 1400 kilometers) from NASA's Wallops Flight Facility, in Wallops Island, Virginia. Wallops originated as a missile test facility at the end of World War II and was put under Goddard management in 1981.

Sounding rockets provide an economical way to test space instruments and study regions of space that cannot be reached with aircraft, balloons or orbiting spacecraft. By the end of 2018, Wallops had hosted over 116,000 launches, according to Goddard's 2018 annual report.

Adjacent to NASA's operations on Wallops Island is the Mid-Atlantic Regional Spaceport (MARS), where Antares rockets have launched Cygnus cargo modules to the International Space Station. MARS is operated by the Commonwealth of Virginia.

The Goddard Institute for Space Studies (GISS) was established in NASA's early days under the directorship of physicist Robert Jastrow, who had been doing theoretical work for the Naval Research Laboratory's Vanguard satellite program in the 1950s.

When the Vanguard team was incorporated into the new NASA Goddard center, Jastrow convinced NASA managers that the theoretical research division should be located near major research universities to attract academic researchers. In 1961, GISS began operating in offices in New York City near Columbia University.

In the late 1960s, GISS moved a few blocks to the building it now occupies. This building later became famous because its ground floor includes Tom's Restaurant, the regular hangout of characters on the "Seinfeld" TV series.

During its early years, under Jastrow, the institute concentrated on astrophysics and planetary science. Under James Hansen, director from 1981 to 2013, and his successor, Gavin Schmidt, GISS research has turned to climate change and other global aspects of Earth's environment.