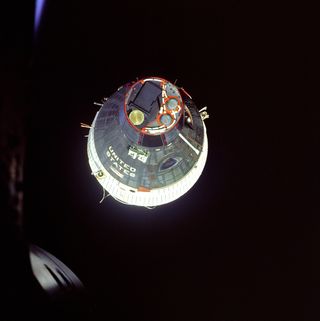 The Gemini program was an essential step to getting Americans on to the moon in the late 1960s. It followed the one-person Project Mercury, which had established that an astronaut could survive a trip of a few minutes or hours. However, there was a lot more to figure out before sending anyone 238,855 miles (384,400 km) away.

Gemini featured endurance missions that went as long as two weeks, which would be ample time for astronauts to get to and from the moon. Astronauts practiced rendezvousing and docking in space, a needed maneuver to join the two spacecraft together during moon missions. Also, astronauts grappled with the tricky problem of performing spacewalks in zero gravity, which took several missions to execute properly.

By the time Gemini concluded in November 1966, NASA felt more confident about maneuvering spacecraft and sending astronauts on extended missions. Many of the Gemini astronauts went on to command Apollo missions, with some landing on the moon itself.

The 'New Nine' and Gemini's beginnings

NASA's new program required more astronauts. Some of the Mercury astronauts had moved on to other things, and there would be slots for far more than the seven astronauts originally brought into NASA. As such, the agency recruited a group of astronauts (informally known as the "New Nine") that was announced on Sept. 17, 1962, just as Mercury was beginning its orbital missions.

The first of the new group of astronauts to reach space was John Young. He joined Gus Grissom (a Mercury astronaut who did a 15-minute flight) aboard Gemini 3 on March 23, 1965, a shakedown mission to see how well the spacecraft and associated ground systems performed. Lasting just three orbits and a few hours, the mission achieved most objectives. It landed about 69 miles (111 km) off course because the spacecraft had less lift than expected during re-entry, but the crew was in good shape except for being seasick.

Two "New Nine" astronauts then flew together on Gemini 4, an ambitious four-day mission to see how well astronauts could survive in space — and how well the ground could support them during a multi-day mission. Jim McDivitt and Ed White blasted off on June 3, 1965.

The mission is best remembered for America's first spacewalk, which took place that same day. White floated outside the spacecraft for 23 minutes on a tether, maneuvering with a small thruster gun and by tugging on the tether. When he was ordered back inside, White said it was "the saddest moment of my life." The astronauts struggled to close the hatch safely once White got back inside, but eventually they got it done.

The next mission, Gemini 5, set a space endurance record. Gordon Cooper and Pete Conrad spent more than eight days in space, traveling 3.3 million miles (5.3 million kilometers) in orbits around the Earth. The spacecraft experienced several technical problems during the flight, including problems with a fuel cell that put off a planned rendezvous experiment, but the crew returned healthy and with many of their mission objectives accomplished. Gemini 5 also marked a milestone in the space race, as the accumulated time in space for NASA of 225 hours and 15 minutes put the Americans ahead of Soviets in that marker during the space race.

With the basics of multi-day spaceflight down, NASA had a list of several things to check off before taking people to the moon. One was figuring out how to dock two spacecraft together in space. The agency attempted to provide an Agena docking target for Gemini 6, but the robotic spacecraft exploded during launch.

The agency instead decided to combine the activities of Mercury veteran Wally Schirra and Tom Stafford with Gemini 7's two-week endurance mission. Frank Borman and Jim Lovell blasted off on Dec. 4, 1965, with newly named Gemini 6a to follow.

On launch day of Dec. 12, however, the Titan II rocket shut down only two seconds after its ignition. Schirra elected not to eject — "I had my butt working for me," he wrote later — and another launch attempt three days later occurred without major incident. As planned, the two spacecraft then made a close approach in space.

The last few Gemini missions were mostly devoted to figuring out advanced docking techniques as well as nailing down how to perform a spacewalk. In the earlier missions, astronauts found themselves struggling and exhausted as they tried to cling on to the side of a spacecraft in zero gravity to do tasks.

As NASA became more experienced, it added handholds and footholds and changed the approach to make spacewalks easier for astronauts. It also added more astronauts to its corps, with 14 new ones joining in 1963 for flights beginning late in the Gemini program.

Gemini 8 accomplished the first docking in space shortly after its launch on March 16, 1966, but adverse circumstances intervened. Astronauts Neil Armstrong and Dave Scott (one from the newest class) found themselves rotating rapidly, and undocked from the Agena spacecraft because they thought the Agena was malfunctioning. It turned out to be a stuck thruster on Gemini 8.

Rotating as fast as a revolution per second, Armstrong quickly turned on the re-entry system and saved them, but ended the mission early. Armstrong's actions drew praise in the agency and may have been a factor for tapping him as the first man on the moon.

Gemini 9A, launched June 3, 1966, was supposed to dock with an Agena target, but astronauts Eugene Cernan and Tom Stafford discovered a part of the spacecraft had not deployed as planned. "It looks like an angry alligator out here rotating around," Stafford radioed to the ground. Cernan's planned spacewalk had to be cut short when the astronaut struggled to don a maneuvering backpack outside.

The next month, Gemini 10 launched with John Young and Michael Collins aboard. The astronauts successfully rendezvoused with an Agena target, but used more fuel than anticipated — canceling further maneuvers. Collins also performed two spacewalks, again encountering difficulties with the lack of handholds.

Gemini 11 docked with an Agena after its launch on Sept. 12, 1966. Dick Gordon performed two spacewalks while commander Pete Conrad remained inside the spacecraft. Among other achievements, the astronauts boosted their spacecraft to a higher orbit and did an artificial gravity test using a tether.

Finishing up the program was Gemini 12, which launched Nov. 11, 1966, with Jim Lovell and Buzz Aldrin on board. Aldrin performed three spacewalks while the astronauts did docking maneuvers with their Agena. With this and the rest of the Gemini program accomplished, NASA felt ready to begin its reach for the moon during the Apollo program.