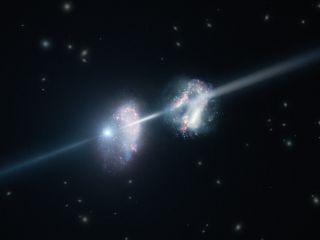 This artist’s impression shows two galaxies in the early universe. The brilliant explosion on the left is a gamma-ray burst. The light from the burst travels through both galaxies on its way to Earth (outside the frame to the right).
(Image: © ESO/L. Calçada)

Gamma-ray bursts are the strongest and brightest explosions in the universe, thought to be generated during the formation of black holes. Though they last mere seconds, gamma-ray bursts produce as much energy as the sun will emit during its entire 10-billion-year existence.

The enigmatic phenomena were first seen in 1967 by a U.S. Air Force satellite called Vela. The probe was designed to keep watch for secret Soviet nuclear testing, but it ended up spotting dazzling gamma-rays — the most powerful electromagnetic radiation — coming from beyond the solar system, according to NASA. When such an event happened, it would briefly become the brightest gamma-ray object in the observable universe.

It wasn't until 1991 that astronomers launched the Compton Gamma Ray Observatory with the Burst and Transient Source Experiment (BATSE), which discovered roughly one new gamma-ray burst per day. BATSE found that gamma-ray bursts were distributed evenly across the sky, meaning they were occurring everywhere in the cosmos, according to the Swinburne University of Technology in Australia. BATSE also showed that there were two types of gamma-ray bursts with distinct signatures: those that lasted 2 to 30 seconds, and those that flashed for less than 2 seconds.

Since then, researchers have learned a great deal more about gamma-ray bursts by developing a network of rapid-response satellites and ground-based observatories that all converge on a gamma-ray burst as soon as it's detected. This network has provided data showing that gamma-ray bursts are located in galaxies billions of light-years away and that, after the initial gamma-ray flare, the source of the burst produces an afterglow in less-energetic wavelengths.

Where do gamma-ray bursts come from?

The longer-lived versions of gamma-ray bursts have been found to be associated with ultrapowerful supernovas called hypernovas, which occur when stars between five and 10 times the mass of our sun end their lives and implode into black holes, according to NASA. Hypernovas are 100 times brighter than typical supernovas and are thought to be generated by stars that are spinning particularly fast or have an especially strong magnetic field, imparting extra energy to their combustions.

But the short-lived gamma-ray bursts, which make up 30% of such events, remained a mystery until 2005, mainly because they are too quick and fleeting for follow-up observations. After being launched in 2004, NASA's Neil Gehrels Swift Observatory (previously called the Swift Gamma-Ray Burst Explorer) was finally able to record enough data to see the afterglow of short-lived gamma-ray bursts and figure out that they were likely caused when two ultradense stellar corpses known as neutron stars collided and formed a black hole, or when a black hole ate a neutron star.

Such outbursts are so strong that they produce ripples in the fabric of space-time called gravitational waves. Now that researchers have fired up the Laser Interferometer Gravitational-Wave Observatory (LIGO), which can detect gravitational waves from these collisions, they are expected to be able to gather even more information about the processes underlying short-lived gamma-ray bursts.

There are still many unknowns about gamma-ray bursts. Recent observations have shown that the photons emitted from gamma-ray bursts all oscillate in the same direction, but for some reason, the direction changes over time. "What this could be, we really don't know," Merlin Kole, a scientist at the University of Geneva in Switzerland and one of the lead researchers on the study, said in a statement after this 2019 discovery.

Gamma-ray bursts also seem to focus their energy in a narrow beam, rather than emitting it equally in every direction, meaning that our satellites are missing many of them. Astronomers estimate that, although satellites spot about one gamma-ray burst per day, roughly 500 are occurring within the same time period.

So far, gamma-ray bursts have only been detected in distant galaxies. However, it is possible for one to occur in our Milky Way galaxy. The Ordovician extinction — one of five big extinction events in our planet's history — happened around 450 million years ago and might have been caused by an ice age triggered by a gamma-ray burst. If a new gamma-ray burst were to happen near Earth, it would strip our planet's protective ozone layer away and expose all life to deadly ultraviolet radiation. So, although scientists might appreciate the opportunity to witness a gamma-ray burst up close one day, they're also OK with not observing one in our home galaxy.