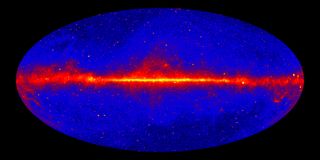 Astronomers created this all-sky map of the cosmos using data collected by the Fermi Gamma-ray Space Telescope. The map shows gamma-rays detected by the telescope from 2008 to 2017.
(Image: © NASA/DOE/Fermi LAT Collaboration)

The Fermi Gamma-Ray Telescope is a space observatory designed to study the universe in highly energetic frequencies known as gamma-rays. It includes participation from NASA, the U.S. Department of Energy, and several partners both in the United States and internationally. The mission was launched in 2008 and remained operational as of mid-2018.

In 2000, the National Academies of Sciences' Decadal Survey, which identifies the scientific community's top priorities for research in the coming years, a mission studying energetic gamma-rays was the top priority for a mid-sized project, according to NASA.

Scientists saw Fermi as a successor to NASA's Compton-Gamma-ray Observatory, which operated between 1991 and 1999. NASA said that Fermi's field of view and sky survey capabilities were twice as large as one of Compton's instruments, and 30 times as sensitive. Fermi was also designed as a complement to the Neil Gehrels Swift Observatory; Swift is optimized to look at the locations of gamma-ray bursts, as well as their afterglows.

NASA described Fermi as "an astrophysics and particle physics partnership," which included development by NASA in collaboration with the U.S. Department of Energy. International partners from France, Germany, Italy, Japan and Sweden also contributed, as well as other institutions in the United States. The mission cost $690 million (with a U.S. contribution of $600 million and an international contribution of $90 million).

Fermi, which was called the Gamma-ray Large Area Space Telescope (GLAST) until it reached its operational orbit, launched on June 11, 2008, from Cape Canaveral Air Force Station aboard a Delta II Heavy rocket. It was placed into a circular orbit around Earth with an altitude of about 350 miles (560 kilometers). It circles the planet every 90 minutes. "This orbit is chosen to minimize the effects of charged particles that surround Earth, and which would create additional unwanted background signals in the detectors, while still ensuring the full mission lifetime," NASA stated.

Fermi was designed to last five to 10 years. The mission passed its 10th anniversary in June 2018 and was still operational as of mid-2018, although it is expected to end operations in fall 2018.

Fermi is designed to examine gamma-ray radiation, the most energetic form of light that there is. Like the visible light that humans can see, gamma-rays are on the spectrum of electromagnetic radiation. Gamma-rays, however, have billions of times more energy than visible light.

In gamma-rays, several types of exotic objects shine brightly. Researchers have seen gamma-ray bursts, which are the most energetic types of explosions in the universe and may have caused a large extinction on Earth. Solar flares – eruptions from our sun – are bright both in visible light and in gamma-rays. Rapidly rotating and ultra-dense stars known as pulsars are also sources of gamma-rays.

Researchers also want to examine gamma-rays to better understand a substance known as dark matter. (Initially, scientists thought that "excess" gamma-rays might be a signal of dark matter, but later research put this hypothesis into doubt.) Dark matter probably makes up most of the known universe, but dark matter can't be "seen" by conventional telescopes. The only way it's visible to us right now is through its effect on other objects, such as gravitational influences. Better understanding dark matter will help researchers make better predictions about things such as star movements and the fate of the universe.

In NASA's words, these are the main mission objectives for Fermi:

To perform its investigations, Fermi carries two instruments: its primary instrument that is called the Large Area Telescope (LAT), and a complementary instrument known as the Gamma-ray Burst Monitor (GBM), according to NASA's Goddard Space Flight Center.

To best understand what energy frequencies they see, here's a quick explanation of an electronvolt (eV). An electronvolt is defined as how much energy a single electron gains when its electric potential increases by one volt, according to Encyclopedia Britannica. (Electric potential is the amount of work to move a unit charge from one spot to another against an electric field.)

Visible light has a photon energy of between 1.6 eV and 3.4 eV. The scale for electronvolts continues as follows: kilo-electron volt (keV, one thousand eV), mega-electron volt (MeV, one million eV), giga-electron volt (GeV, one thousand million eV), etc. For a quick idea of how much energy we're talking about, a single nuclear fission event is measured at about 200 MeV, according to the Lawrence Berkeley National Laboratory. Fermi can view objects at a wide range of scales – anywhere between 8 keV to 300 GeV.

The GBM can view the entire sky and is designed to spot about 200 gamma-ray bursts every year, as well as events such as solar flares. It detects X-rays and gamma-rays that have an energy range between 8 keV and 30 meV, Goddard says.

The LAT can view 20 percent of the sky at once, and if it is left in its default "sky-survey" mode, it will move around the entire sky once every three hours. Researchers can also choose to swing the LAT to view interesting objects. The telescope is also designed to move itself when either the LAT or the GRB sees a gamma-ray burst. LAT is supposed to see photons with energies of between 30 MeV to at least 300 GeV, Goddard says.

Fermi discovered two massive bubbles of material emanating from the Milky Way's center in 2010. Follow-up observations have been performed in X-rays and radio wavelengths, including a Hubble Space Telescope study released in 2015 that clocked these bubbles moving at 2 million mph (3.2 million km/h).

NASA periodically releases all-sky maps from Fermi taken over several years of observations, such as this 2011 version that had two years of data included. More than a third of the sources revealed in this particular map had never been detected before. Also in 2011, Fermi released a large scientific haul of results (including nine newly discovered pulsars) and spotted a mysterious burst near the Crab Nebula.

In April 2013, NASA said Fermi had "dodged a 1.5-ton bullet" just over a year before, in March 2012. An automatic report showed that Fermi was only a week away from a potentially devastating collision with Cosmos 1805, a dead Soviet-era spy satellite that used to be operational during the Cold War in the 1960s. The two satellites were forecast to pass each other by only a few hundred feet, which is a very small margin of error when calculating spacecraft trajectories. Engineers commanded Fermi to fire its thrusters for one second, avoiding the possibility of disaster.

That August, NASA announced it would extend the Fermi mission into 2018 to allow investigators more time to search for links between gamma-rays and dark matter.

A 2014 story on Space.com sister site LiveScience examined the phenomenon of terrestrial gamma-ray flashes, which are gamma-rays that originate from the Earth during intense storms. Fermi can view these Earthly sources of gamma-rays, as well as those originating further out in the universe. The same year, Fermi spotted a gamma-ray's light being focused by a gravitational lens, which occurs when the gravity of a massive object distorts the light of a more distant object.

In 2015, research from Fermi suggested that gamma-rays it found could indicate a magnetic field that originated only a few nanoseconds after the Big Bang that formed the universe. At the time, however, the researchers said the detected signal was weak and required more follow-up observations to be sure.

In another study that year supported by Fermi observations, researchers said that mysterious gamma-ray radiation pervading the universe is likely made up of already known sources. And in 2016, another Fermi study showed that dark matter likely is only a small contributor to background gamma-ray radiation. Another Fermi all-sky map released in 2016 showed the universe's gamma-ray sources in the highest resolution yet.

Solar energy is a contributor to gamma-rays as well, as a 2017 study showed. Hidden solar eruptions were linked to gamma-ray bursts observed by Fermi.

In March 2018, Fermi had an issue with one of its solar array drives, which put the telescope into an automatic "safe hold." With the solar array stuck, engineers moved Fermi into a fixed angle relative to its orbit. "This direction put the most sunlight on a solar panel that stopped moving," NASA stated. By May 2018, Fermi was back to science operations; NASA was still studying the cause of the failure.