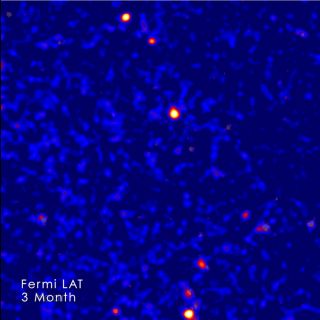 Since 2008, NASA's orbiting Fermi Gamma-ray Space Telescope has been collecting evidence of the observable universe's most powerful explosions and energetic emissions. That high-powered insight has helped researchers in three different recent studies narrow down the materials that may make up mysterious dark matter.

"We've looked for the usual suspects in the usual places and found no solid signals, so we've started searching in some creative new ways," Julie McEnery, Fermi project scientist at NASA's Goddard Space Flight Center in Maryland, said in a statement. [Dark Matter and Dark Energy: The Mystery Explained (Infographic)]

Current hypotheses suggest that four-fifths of the universe's mass consists of a mysterious material that scientists can't observe directly, which researchers call dark matter. The substance makes itself known by the way galaxies rotate and bend light around them, suggesting those celestial structures have more mass than observers can see.

Fermi's observations of the Milky Way's center and of dwarf galaxies have previously helped researchers eliminate various particles posited as dark matter constituents. A new study, published April 20 in the journal Physical Review Letters, searched for an odd candidate — hypothetical particles called axions, or particles that act like them (called axion-like), which can transform into light rays and back again when exposed to strong magnetic fields.

The researchers used Fermi's Large Area Telescope (LAT) to watch gamma-rays emitted by the high-energy galaxy NGC 1275, in the Perseus galaxy cluster. Such gamma-rays would pass through the hot gas and magnetic fields in the rest of the cluster, which could potentially cause the high-energy light to switch to axion-like particles and back again, the researchers said.

While scientists can't detect those particles directly, gamma-rays that went through that transformation would keep a souvenir set of gaps in their electromagnetic spectra.

But study team members didn't find those telltale signs in their gamma-ray measurements, suggesting that dark matter isn't made from axion-like particles with a particular range of masses, the investigators said.

"While we don't yet know what dark matter is, our results show we can probe axion-like models and provide the strongest constraints to date for certain masses," Manuel Meyer, a researcher at Stockholm University in Sweden and lead author of the study, said in the same statement. "Remarkably, we reached a sensitivity we thought would only be possible in a dedicated laboratory experiment, which is quite a testament to Fermi."

WIMPs in the cloud?

A popular model for dark matter holds that they're weakly interacting massive particles (WIMPs), which don't interact strongly with ordinary matter but can run into each other and give off gamma-ray bursts. (Many other studies, like the supersensitive LUX experiment, focus on detecting WIMPs' rare interactions with everyday particles.)

In a separate study, a group of researchers used Fermi to investigate the Small Magellanic Cloud (SMC), a satellite galaxy that orbits the Milky Way. Because this little galaxy is well-understood, the researchers were able to compare the expected output of gamma-rays with the actual, measured amount. The scientists determined that no extra gamma-ray radiation was getting emitted as a result of WIMPs of particular masses running into one another.

Based on detailed measurements of the galaxy's rotation, the scientists could determine how much dark matter to expect in the galaxy — and if that dark matter were composed of a particular flavor of WIMP, the researchers said, they should have been able to detect the extra gamma-ray output.

"The LAT definitely sees gamma-rays from the SMC, but we can explain them all through conventional sources," Regina Caputo, a researcher at University of California, Santa Cruz, and lead author on the work, said in the same statement. "No signal from dark matter annihilation was found to be statistically significant." [Dark Matter Candidate 'Sterile Neutrino' Particle Still a Mystery (Video)]

The study was published April 20 in the journal Physical Review D.

A third study, done at the U.S. Department of Energy's SLAC National Accelerator Laboratory in California, looked for WIMPs as well, but turned its gaze much further outward.

The researchers in that study focused on extragalactic background radiation — the barrage of photons from beyond the Milky Way, which is responsible for 10 trillionths of your sunburn. The gamma-ray band of that background radiation comes mostly from sources such as blazars, galaxies that generate lots of high-energy light as gas falls into their central supermassive black holes.

The study, published April 14 in the journal Physical Review Letters, analyzed extragalactic-background gamma-rays detected over 6.5 years of LAT measurements. The researchers looked to see whether blazars and other gamma-ray sources could account for all of those detections, finding that they could. No WIMP crashes or decay were necessary to explain the radiation, the researchers said.

"There is very little room left for signals from exotic sources in the extragalactic gamma-ray background, which in turn means that any contribution from these sources must be quite small," Marco Ajello, a researcher at Clemson University in South Carolina and one of the study leaders, said in the statement. "This information may help us place limits on how often WIMP particles collide or decay." (Dark matter is not a type of WIMP that would contribute significant gamma-rays to the extragalactic background, in other words.)

Researchers now know three more instances of what exactly dark matter is not, pulling the net tighter on what it might be. That search continues both in space and on the ground, NASA officials said in the statement.