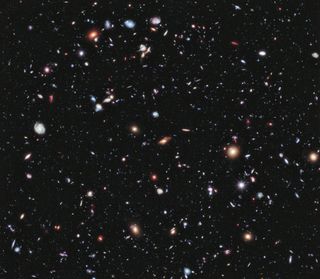 Stars and black holes in distant galaxies — such as those seen here in this Hubble Space Telescope image — contribute about 10-trillionths of the photons that hit Earth, a new study has found.
(Image: © NASA; ESA; G. Illingworth, D. Magee, and P. Oesch, University of California, Santa Cruz; R. Bouwens, Leiden University; and the HUDF09 Team)

If you got a sunburn at the beach this summer, you can put 0.000000001 percent of the blame on radiation from beyond the galaxy.

Every second, every square meter of Earth is bombarded by about 10 billion photons that originated beyond the Milky Way, according to a new study that measured this "extragalactic background light" (EBL) with unprecedented accuracy. (One square meter is equivalent to 10.8 square feet.)

That seems like a big number, but those 10 billion photons represent just ten-trillionths of the total number that bathe every square meter of the planet, study team members said. (The vast majority, of course, come from the sun, but the leftover radiation from the Big Bang and a few other sources also make meaningful contributions.) [The Universe: Big Bang to Now in 10 Easy Steps]

The scientists also used observations from the Galaxy And Mass Assembly survey, which incorporates data from a variety of ground- and space-based instruments.

All of this information allowed the team to make the best-ever measurement of the EBL — which is emitted by objects such as extragalactic stars and black holes — over a broad wavelength range.

For example, in addition to calculating the volume of EBL photons, the researchers characterized the photons' wavelength distribution. They found two big "humps" in the EBL — the "cosmic optical background," consisting of ultraviolet (UV), optical and near-infrared light; and the "cosmic infrared background," which is composed of mid- and far-infrared light.

"By far, the majority of all energy produced in the universe (other than the Big Bang) comes out in these wavebands, in about equal proportions," Driver told Space.com via email. "There are other backgrounds — the radio background and the X-ray background — but these are about 100 times weaker."

"The galaxies themselves provide us with a natural suntan lotion with an SPF of about 2," study co-author Rogier Windhorst, a professor in the School of Earth and Space Exploration at Arizona State University, said in a statement.

The new study, which was published online today (Aug. 11) in The Astrophysical Journal, marks a big step forward in researchers' big-picture understanding of the universe's evolution, Driver said.

"We now have a complete record of all energy produced in the universe over the past 13 billion years," he told Space.com via email. "Comparing this to our models, we also seem to be able to explain it. This is both humbling (how can we possibly really understand all the energy produced in the universe over all time; is it really that simple?), and also frightening (we seem to be running out of universe to study!)."