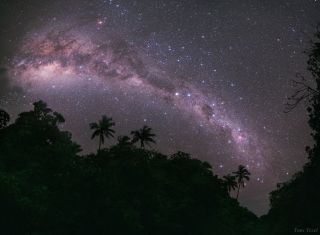 This heavenly view of the Milky Way galaxy was taken in the South Pacific paradise of Mangaia, the most southerly of the Cook Islands. This image was chosen as one of the winners of the National Maritime Museum's Astrophotographer of the Year 2011 Contest.
(Image: © Tunc Tezel)

The Milky Way Galaxy is most significant to humans because it is home sweet home. But when it comes down to it, our galaxy is a typical barred spiral, much like billions of other galaxies in the universe. Let's take a look at the Milky Way.

A glance up at the night sky reveals a broad swath of light. Described by the ancients as a river, as milk, and as a path, among other things, the band has been visible in the heavens since Earth first formed. In reality, this intriguing line of light is the center of our galaxy, as seen from one of its outer arms.

Understanding the structure of the Milky Way has long been challenging. The solar system sits on the outer edges of one arm in a disk of material, and no one can see across the dense center to the other side.

"The sun's location within the dust-obscured galactic disk is a complicating factor to observe the galactic structure," Denilso Camargo, of the Federal University of Rio Grande do Sul in Brazil, said in a statement.

The Milky Way is a barred spiral galaxy, about 100,000 light-years across. If you could look down on it from the top, you would see a central bulge surrounded by four large spiral arms that wrap around it. Spiral galaxies make up about two-third of the galaxies in the universe. [Infographic: Our Milky Way Galaxy: A Traveler's Guide]

Unlike a regular spiral, a barred spiral contains a bar across its center region, and has two major arms. The Milky Way also contains two significant minor arms, as well as two smaller spurs. One of the spurs, known as the Orion Arm, contains the sun and the solar system. The Orion arm is located between two major arms, Perseus and Sagittarius.

"Spiral arms are like traffic jams in that the gas and stars crowd together and move more slowly in the arms. As material passes through the dense spiral arms, it is compressed and this triggers more star formation," said Camargo.

Our galaxy is surrounded by an enormous halo of hot gas that extends for hundreds of thousands of light-years. The gas halo is estimated to be as massive as all of the stars in the Milky Way. Like the galaxy itself, the halo is spinning rapidly.

"This flies in the face of expectations," Edmund Hodges-Kluck of the University of Michigan said in a statement. "People just assumed that the disk of the Milky Way spins while this enormous reservoir of hot gas is stationary – but that is wrong. This hot gas reservoir is rotating as well, just not quite as fast as the disk."

Curled around the center of the galaxy, the spiral arms contain a high amount of dust and gas. New stars are constantly formed within the arms. These arms are contained in what is called the disk of the galaxy. It is only about 1,000 light-years thick. [Photo Gallery: Stunning Photos of Our Milky Way Galaxy]

At the center of the galaxy is the galactic bulge. The heart of the Milky Way is crammed full of gas, dust, and stars. The bulge is the reason that you can only see a small percentage of the total stars in the galaxy. Dust and gas within it are so thick that you can't even peer into the bulge of the Milky Way, much less see out the other side.

Tucked inside the very center of the galaxy is a monstrous black hole, billions of times as massive as the sun. This supermassive black hole may have started off smaller, but the ample supply of dust and gas allowed it to gorge itself and grow into a giant. The greedy glutton also consumes whatever stars it can get a grip on. Although black holes cannot be directly viewed, scientists can see their gravitational effects as they change and distort the paths of the material around it, or as they fire off jets. Most galaxies are thought to have a black hole in their heart. [Photo Gallery: The Milky Way's Core]

The bulge and the arms are the most obvious components of the Milky Way, but they are not the only pieces. The galaxy is surrounded by a spherical halo of hot gas, old stars and globular clusters. Although the halo stretches for hundreds of thousands of light-years, it only contains about two percent as many stars as are found within the disk.Scientists can't directly detect the material, but like black holes, they can measure it based on its effect on the objects around it. As such, dark matter is estimated to make up 90 percent of the mass of the galaxy.

Recent measurements have weighed the galaxy at between 400 billion and 780 billion times the mass of the sun. By focusing on how the Milky Way affects its neighboring globular clusters, dense groups of stars smaller than a galaxy, scientists were able to calculate the mass of the Milky Way at varying distances. The result can help them improve their understanding of how much of the galaxy is made up of ordinary material like dust and stars, and how much is composed of dark matter.

"Even though we know the dark matter should be there, [and] we think it should be there, the ratio of dark matter to luminous matter in particular galaxies may be under debate," Gwendolyn Eadie, a Ph.D. candidate in astrophysics at McMasters University in Ontario, Canada, and co-author on the research, told Space.com.

The Milky Way contains over 200 billion stars, and enough dust and gas to make billions more.

"It's almost like we're sailing through the galaxy sideways," Merav Opher, an astrophysicist at George Mason University in Virginia, told Space.com.

More than half the stars found in the Milky Way are older than the 4.5-billion-year-old sun. Galaxies like ours typically undergo a stellar baby boom, churning out stars in enormous quantities roughly 10 billion years ago.

The most common stars in the galaxy are red dwarfs, a cool star about a tenth the mass of the sun. Once thought unsuitable for potential life-bearing planets because such bodies would have to be too close to meet the criteria, red dwarfs are now considered potential suspects.

As late as the 1920s, astronomers thought all of the stars in the universe were contained inside of the Milky Way. It wasn't until Edwin Hubble discovered a special star known as a Cepheid variable, which allowed him to precisely measure distances, that astronomers realized that the fuzzy patches once classified as nebula were actually separate galaxies.

NASA recently selected the Galactic/Extragalactic ULDB Spectroscopic Terahertz Observatory (GUSTO) mission to fly a telescope carried by balloon to map out large sections in the Milky Way and nearby Large Magellenic Cloud. The mission plans to launch in 2021 from McMurdo, Antarctica and should remain in the air between 100 and 170 days, depending on weather conditions.