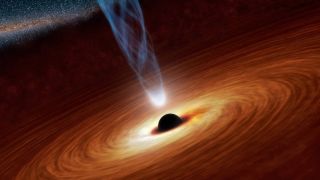 An artist's depiction of a black hole at the center of a galaxy.
(Image: © NASA/JPL-Caltech)

Astronomers have been watching the black hole at the center of our galaxy for 20 years, and in May, they saw something they'd never seen before.

Well, technically, they aren't watching the black hole itself, which scientists call Sagittarius A*, or Sgr A*. Instead, they're looking at the matter around that black hole. When the Milky Way's black hole is more active than usual, that event horizon becomes brighter as it heats up due to friction. Usually, Sgr A* is pretty calm for a black hole, but in May, that changed, according to new research.

"The black hole is always variable, but this was the brightest we've seen in the infrared so far," Tuan Do, an astronomer at the University of California, Los Angeles, and lead author of the new study, said on Twitter. "It was probably even brighter before we started observing that night!"

That hypothesis is based on the fact that, when the astronomers focused on the area on May 13, they only saw relatively high brightness decreasing, suggesting that the black hole had passed an unknown peak that was even brighter. According to the new paper, the recent flare brought Sgr A* to twice the brightness of the highest previous measurement to date.

Do and his colleagues made the observations using the Keck telescopes on the summit of Mauna Kea in Hawaii. That instrument can see the world in near infrared light, which encompasses wavelengths a bit longer than those our eyes can see.

Here's a timelapse of images over 2.5 hr from May from @keckobservatory of the supermassive black hole Sgr A*. The black hole is always variable, but this was the brightest we've seen in the infrared so far. It was probably even brighter before we started observing that night! pic.twitter.com/MwXioZ7twVAugust 11, 2019

They think the black-hole flare may have been caused by the close passage of either a star called S0-2 last year or a dusty object called G2 in 2014.

The scientists hope more observations of Sgr A* will help them sort out what the massive black hole is doing. Those observations include measurements made overnight on Aug. 13 and 14 after a hiatus due to protests at Mauna Kea.

Other instruments, including the Spitzer and Chandra space telescopes and ground-based instruments, have pointed to Sgr A* on and off throughout the past few months, although those data have yet to be analyzed. ART-XC, a new Russian space telescope that launched about a month ago, also has turned its eye on the black hole despite still being in its calibration period.

The black hole is also the target of the globe-spanning Event Horizon Telescope, a collaboration that published the first image of a black hole in April. The historic image was of the black hole at the heart of a galaxy called M87, but the scientists are also working on processing data about Sgr A*.

The original observations are described in a paper posted to the preprint server arXiv.org on Aug. 5 that was recently accepted for publication in The Astrophysical Journal Letters.