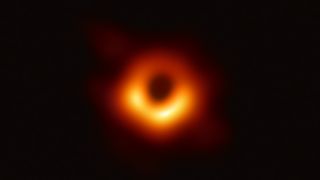 The Event Horizon Telescope, a planet-scale array of eight ground-based radio telescopes forged through international collaboration, captured this image of the supermassive black hole in the center of the galaxy M87 and its shadow.
(Image: © EHT Collaboration)

The researchers who captured the first-ever images of a black hole don't plan to rest on their laurels.

Yesterday (April 10), the Event Horizon Telescope (EHT) collaboration announced that it had photographed the contours of the supermassive black hole at the heart of M87, a huge elliptical galaxy that lies 55 million light-years from Earth.

Those contours outline the black hole's event horizon, the famous point of no return beyond which nothing, not even light, can escape.

The epic achievement further bolsters Einstein's theory of general relativity, which describes gravity as a consequence of the warping of space-time. And the newly unveiled images should help scientists better understand how black holes tick, and how the biggest ones — such as the M87 monster, which harbors the mass of 6.5 billion suns — shape the evolution of their host galaxies, scientists said.

But that doesn't mean the project's work is done — far from it. For example, it should be possible to sharpen the existing images using algorithms, EHT director Sheperd Doeleman, of Harvard University and the Harvard-Smithsonian Center for Astrophysics, said during a press conference yesterday.

And we could soon get a look at another black hole as well.

The new result came from a weeklong observing campaign conducted in April 2017 — a run during which the researchers also studied the supermassive black hole at the heart of our own Milky Way galaxy. This object, known as Sagittarius A*, harbors 4.3 million solar masses and lies about 26,000 light-years from Earth.

Sagittarius A* is more variable over short timescales than the M87 black hole and is therefore more difficult to image, Doeleman said. But the team is optimistic that it will be able to pull a picture of Sagittarius A*'s event horizon out of the data as well.

"We're not promising anything, but we hope to get that very soon," Doeleman said.

And the team has more than just 2017 data to go through. The EHT project also observed the two supermassive black holes for a week last year, with even greater resolution.

Related: What Is a Black Hole Event Horizon (and What Happens There)?

The EHT integrates multiple radio telescopes around the world, forming a virtual instrument the size of Earth. (You have to go that big to resolve the two supermassive black holes, which are incredibly dense but quite small, volumewise, on a cosmic scale.) During the 2017 run, eight dishes in six different locales comprised the EHT megascope. The team added one dish, in Greenland, for the 2018 campaign, "which dramatically increased our coverage to the north on M87," Doeleman said.

The team will also soon incorporate another dish — one atop Kitt Peak, in southern Arizona, he added.

"These will all increase the imaging fidelity," Doeleman said. "They'll fill out that virtual mirror that we're trying to build."

To date, the EHT has observed the black holes in just one frequency — light with a wavelength of 1.3 millimeters. But the project soon plans to look at the 0.87-mm frequency as well, which should lead to additional improvements.

"It sounds like a small jump, but it increases your angular resolution — the resolving power — by over 30%," Doeleman said. "So, you wind up sharpening your image just by observing at higher frequencies."

And that's just the near future. Over the longer haul, the collaboration would like the virtual scope to include an off-planet dish.

"World domination is not enough for us; we also want to go into space," Doeleman said. "If we could put a space-based radio telescope in orbit around the Earth, it would sweep out even more of that virtual mirror and do it much more quickly."

Going into space would allow the EHT to capture some even more jaw-dropping imagery.

"We could make movies instead of pictures," Doeleman said in an EHT talk last month at the South by Southwest (SXSW) festival in Austin, Texas. "We want to make a movie in real time of things orbiting around the black hole. That’s what we want to do over the next decade."

(Interestingly, the biggest obstacle to this grand expansion may be data transmission. Each EHT dish collects so much data during the project's observing runs that hard drives must be physically transported from telescope sites to central processing facilities; there's just too much to relay electronically on any reasonable timescale. So, it's unclear how the team would get data down from space, EHT project scientist Dimitrios Psaltis, of the University of Arizona, said during the SXSW event last month.)

EHT isn't the only project shining significant light on black holes. For example, NASA's Nuclear Spectroscopic Telescope Array (NuSTAR) spacecraft is hunting for, and helping to characterize, supermassive black holes around the universe.

And future projects — such as the European Space Agency's Laser Interferometer Space Antenna mission, which is scheduled to launch in the mid-2030s — will aim to spot gravitational waves generated by mergers of supermassive black holes.

"The subject of black holes is [ready] for prime time," said Avi Loeb, the chair of Harvard's astronomy department and founding director of the university's interdisciplinary Black Hole Initiative.

"There's a multitude of ways that would be complementary of studying the conditions near a supermassive black hole," Loeb, who is not part of the EHT team, told Space.com. "There are a lot of interesting things that we can find out."