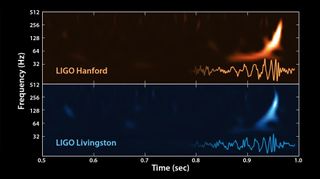 As black holes spiral closer together, the frequency of their gravitational waves increases.
(Image: © LIGO)

Read more about LIGO, gravitational waves, and what a direct detection means for astronomy, in Space.com's complete coverage below. (Note: Some of the stories below discuss a putative discovery of primordial gravitational waves in 2014 by a team using the BICEP2 telescope in Antarctica. But outside researchers have called that detection into question, claiming the gravitational-wave signal was likely caused by space dust.)

LIGO Generations (Trailer ) 'LIGO: A Passion for Understanding' — The Minds Behind the Film

The Gravitational Wave Crests: Big Discoveries are Worth the Wait (Op-Ed )
In science, discovery cannot be rushed — finding gravitational waves took decades, but the long investment was worth the risk, argues NSF's Fleming Crim.

DISCOVERY STORY: In Historic First, Einstein's Gravitational Waves Detected Directly
In one of the biggest discoveries in the history of space science, researchers have directly detected gravitational waves, the ripples in space-time predicted by Einstein. The detection should open a new era of astronomical observations.

Epic Gravitational Wave Detection: How Scientists Did It
To spot gravitational waves directly for the first time ever, scientists had to measure a distance change 1,000 times smaller than the width of a proton. Here's how they did it.

Have Gravitational Waves Been Detected? Scientists Provide Update Today
Researchers affiliated with the Laser Interferometer Gravitational-Wave Observatory (LIGO) are holding a news conference today (Feb. 11) at 10:30 a.m. EST (1530 GMT) at the National Press Club in Washington, D.C. You can watch it live on Space.com.

Gravitational Waves: A Black Hole Is Trying to Slap You — Can You Feel It?
Studying the ripples in space-time known as gravitational waves could allow astronomers to open a new window on the universe.

Have Gravitational Waves Finally Been Spotted?
Scientists are holding a press conference Thursday (Feb. 11) to discuss the search for gravitational waves, ripples in the fabric of spacetime whose existence was first predicted by Albert Einstein in 1916 in his theory of general relativity.

Gravitational Wave Rumors Rumble Social Media
In the roller-coaster rumor mill that surrounds some of the biggest physics endeavors of our time, it pays to remain skeptical when extraordinary claims of historic discoveries are made on social media.

LISA Pathfinder to Refine Hunt for Gravitational Waves
A new spacecraft will test ideas to find gravitational waves in the universe.

Astronomy's Search for Gravitational Waves Gets a Boost
A new program will search for hard-to-spot gravitational waves by looking at how they distort the signals of fast-spinning millisecond pulsars.

Ask Them Anything: The Hunt for Gravitational Waves
One of the most sensitive detectors in human history just got a $200+ million upgrade — this week, join project scientists in a Reddit AMA.

How Cosmic Clocks Help Search for Gravitational Waves (Video)
Interruptions in the regular tick-tock of nature's clocks could be a sign that gravitational waves are passing through.

Do Gravitational Waves Cause Tiny Earthquakes?
The Earth and moon can serve as giant detectors for ripples in the fabric of space-time known as gravitational waves, which are given off by stars, black holes and other massive objects in deep space, researchers say.

The Search for Gravitational Waves: New Documentary on Project LIGO Launches (Watch Online)
A newly released documentary brings the hunt for ripples in the fabric of space-time — called gravitational waves — into focus, and you can watch it live on Space.com.

Project LIGO: How Lasers Could Reveal Glimpses of Gravitational Waves
The ripples from violent cosmic collisions can be felt far across the universe, and thanks to a new, sensitive detector expected to start collecting data next year, scientists might be able to see evidence of those ripples from Earth for the first time.

Major Discovery: 'Smoking Gun' for Universe's Incredible Big Bang Expansion Found
Astronomers have found the first direct evidence of cosmic inflation, the theorized dramatic expansion of the universe that put the "bang" in the Big Bang 13.8 billion years ago. The find also confirms the existence of gravitational waves.

Freaky Physics: Why the Discovery of Gravitational Waves Should Blow Your Mind
The find suggests that space-time really did expand at many times the speed of light in the first few tiny fractions of a second after the Big Bang, as predicted by the theory of cosmic inflation, researchers say.

How Space Tech Helped Scientists ID Gravitational Waves from Big Bang Inflation
To make the find, astronomers developed a big new array of superconducting detectors for a telescope at the South Pole, which spotted characteristic patterns in ancient light left over from the Big Bang.

Cosmic Inflation & Gravitational Waves: Complete Coverage of Major Discovery
On March 17, 2014 scientists announced the first direct detection of the cosmic inflation behind the rapid expansion of the universe just a tiny fraction of a second after the Big Bang 13.8 billion years ago. Gravitational waves play a big role.

Cosmic Inflation: Have Scientists Indeed Found the Smoking Gun? (Q+A)
How strong is the proof for cosmic inflation, the event that drove the Big Bang?