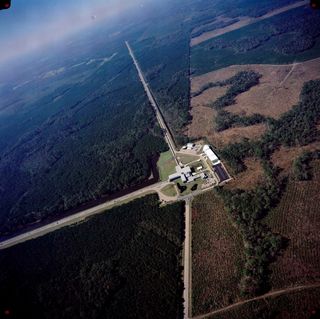 Certain detection of gravitational waves requires at least two detectors located at widely separated sites. Regional phenomena such as micro-earthquakes, acoustic noise, and laser fluctuations can cause disturbances that simulate a gravitational wave event, but do not seem likely to happen simultaneously at two distant sites. Settings for the LIGO observatories were selected by the National Science Foundation (NSF) near Livingston, Louisiana, and at Hanford, Washington. These venues, separated by nearly 2,000 miles, possess the size and flatness sufficient to accommodate the 2.5-mile (4-kilometer) interferometer arms.

How Gravitational Waves Could Be Detected With LIGO (Infographic)

The Laser Interferometer Gravitational-Wave Observatory (LIGO) tries to detect gravitational waves. The detector consists of a 4-foot diameter vacuum pipe arranged in the shape of an L with 2.5-mile (4-kilometer) arms. Since gravitational waves penetrate the earth unimpeded, these installations don't need exposure to the sky and remain entirely shielded in a concrete cover. At the vertex of the L, and at the end of each of its arms, hang test masses from wires, and the masses possess mirror surfaces. These mirrors make up the sensors of gravitational waves. Two facilities, thousands of miles apart, will eliminate uncertainty in the results.

Large gate valves are visible above the beam pipes to either side of the chambers.

HAM from the Inside

HAM (Horizontal Access Module) is a vacuum chamber holding the input and output optics that inject laser light into the main LIGO interferometer, and further receives output light from the interferometer.

The pre-stabilized laser (PSL) provides frequency and intensity stabilized light for the Advanced LIGO interferometers. The heart of the PSL is a three-stage laser system. The second stage delivers an output power of 35 W. Here the NPRO beam passes through four Nd:YVO4 crystals, also pumped at 808 nm.

Gravitational waves are ripples in the fabric of space-time. When they pass through LIGO's L-shaped detector they will decrease the distance between the test masses in one arm of the L, while increasing it in the other.